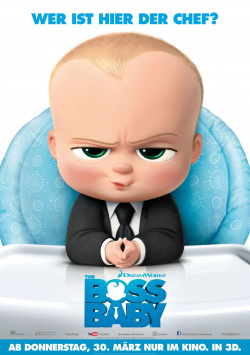 Tim leads a perfect life as an only child. His parents give him love and attention and the boy enjoys the many little rituals they share with him. But that ends abruptly when a baby brother makes his way into the family. The new arrival robs the parents of time and sleep, so that Tim is increasingly pushed to the sidelines. The adults don't seem to notice that something is wrong with the baby. After all, he always wears a suit, comes to the family by taxi and carries around a briefcase. And in fact, the baby has a secret: it is a spy who is supposed to find out what revolutionary idea is being worked on at the company Tim's parents work for. Because there seems to be a giant conspiracy at work that will see babies supplanted in the popularity stakes by cute puppy dogs. And Boss Baby must stop that at all costs.

The idea of The Boss Baby, taken from a picture book by Marla Frazee, is really nice in itself. How babies are chosen for whether they go to a family or are sent straight into administration is thoroughly original and funny. And yet, overall, the film is once again a prime example of what's going wrong with so many animated films right now. There seems to be a list somewhere at the studios that is meticulously checked off to guarantee the success of such films. There's little room for real ingenuity and the working out of good ideas. To be sure, The Boss Baby has a few of those to offer. But these are almost completely diluted by the squeezing into the Schema-F.

That there are scenes with the obligatory 3-D roller coaster effect, as always, is unfortunately already absolute standard. But the fact that one of the kids who is part of the Boss Baby team looks almost exactly like little Agnes from the I - Simply Incorrigible movies is a perfect example of how little creativity and how much pure calculation goes into such movies. Luckily there are still some animated movies that show a high degree of originality or can entertain well even if they use some known elements. But The Boss Baby is unfortunately not one of them.

Sure, the movie has some entertainment value, especially for younger viewers. But it has no identity of its own except for its nice basic idea. That so little has been made of such an imaginative template, just to make a lot of money and a few cheap laughs, is a real shame - even if there is a big audience for films like this. So if you can't get enough of farting babies and colorful, flashy off-the-shelf animated adventures, you'll be absolutely fine here and will have plenty of fun. But if you expect a really original and clever fun for young and old because of the nice idea, you might be a bit disappointed. Therefore: With deductions still worth seeing!