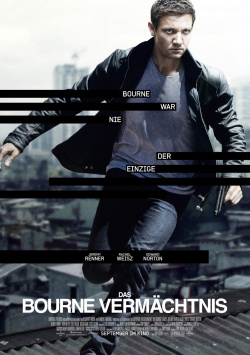 After three successful outings as Jason Bourne, Matt Damon said goodbye to the character, which presented the series' creators with a real problem. After all, the films made enough money to justify another installment. But a new actor as Jason Bourne was not really an option, especially since the story of this character is actually over with the end of The Bourne Ultimatum. But in order to be able to lure fans back into the cinemas for a fourth part, the name Bourne must of course not be missing from the title. So what to do? Tony Gilroy, who had written the scripts for the first three parts and was now allowed to move to the director's chair, has come up with something special. He has written a Bourne film without Jason Bourne, but in which his presence is constantly felt and whose actions from the last film had such far-reaching effects that other secret operations are now also affected. So the fourth installment is about The Bourne Legacy:

Now that Jason Bourne, and with it the secret Treadstone program, have been made public, the CIA must fear that other secret programs will now be revealed as well. In particular, Operation Outcome, the successor to the Treadstone program, must remain secret at all costs. Ret. Colonel Eric Byer (Edward Norton), director of the secret organization NRAG and founder of the two operations, knows exactly what is at stake. And that's why he's willing to sacrifice his own job to preserve the integrity of his organization. That means eliminating everyone involved in Outcome, both agents and scientists. But in the process, Aaron Cross (Jeremy Renner), one of six Outcome agents manages to escape. Cross is also able to save Dr. Marta Shearing (Rachel Weisz), whose work in the lab made Outcome possible, before Byer's henchmen can put a bullet in her head. Together, they search for a way to stay alive and put a stop to Byer. But he still has an ace up his sleeve, as Outcome wasn't the last secret program he launched.

The Bourne Legacy picks up directly where its predecessor left off, and also assumes some prior knowledge on the part of the viewer. If these are not present, extreme confusion quickly sets in, especially in the first half hour. Even for those who are familiar with the Bourne series, it is difficult to keep track of all the secret organizations, even more secret operations and new as well as old protagonists. If you're just entering the Bourne universe for the first time with this fourth film, you might soon be completely lost. But little by little the jumbled puzzle takes on a coherent overall picture that defies the laws of logic time and again, but is tremendously fun to watch and can generate suspense at a high level.

The question that naturally comes first is whether Jeremy Renner (Deadly Command, The Avengers) can fill the void left by Matt Damon. The answer, quite clearly, is yes! However, it's not made entirely easy for him, as Aaron Cross just isn't as interesting a character as Jason Bourne. But as an action hero, Renner does a really good job. No matter if it's about fast-paced chases over rooftops or narrow alleys, if on foot or on a motorcycle, if with a gun or in direct duels, Aaron Cross is in no way inferior to Jason Bourne in these moments.

Anyway, the action sequences are the real highlight of the movie. While realism may not have been the default for the makers here, they somehow come across as believable and extremely engaging in their over-the-top way. It may be that The Bourne Ultimatum can't quite keep up with its predecessors dramaturgically. In terms of action and suspense, however, Gilroy has definitely succeeded in creating a worthy sequel. That's not to say that the film should be reduced to its action sequences alone. Because even if he didn't always succeed, Tony Gilroy at least tried to spin the story logically further and tie up some loose ends to a coherent whole. This is especially noticeable when you watch the first three parts again after the movie. The film is filled with references to the predecessors, which, however, are sometimes completely lost in the somewhat overloaded scenario.

If you liked the Jason Bourne films not only because of (or despite) Matt Damon, you should not miss the continuation of the story. Because The Bourne Ultimatum is very well directed action cinema with good actors, a thrilling story and explosive stunts. A worth seeing legacy and a convincing debut for Jeremy Renner and therefore also: Absolutely worth seeing!

Cinema trailer for the movie "The Bourne Legacy (USA 2012)"
Loading the player ...