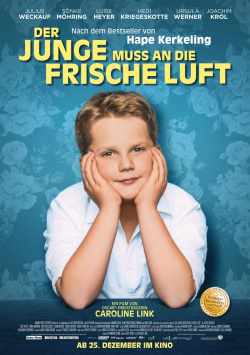 The boy must go outdoors

At the beginning of the 1970s, 9-year-old Hans-Peter (Julius Weckauf) grew up with his family in the Ruhrpott. Although not everything is always rosy, the boy has developed a very cheerful disposition. He manages again and again to make his relatives, but especially his mother (Luise Heyer) laugh. When his mother becomes more and more depressed by the consequences of an operation, Hans-Peter sees it as his task to be even more funny and cheerful for his mother, in order to be able to give her a smile even in these difficult times. He has no idea that this will lay the foundation for his later career, which will one day make him one of the greatest entertainers in Germany…

"Der Junge muss an die frische Luft" ("The boy has to get some fresh air") tells an important chapter from the childhood of Hape Kerkeling, one of the most popular comedians in Germany. Oscar winner Caroline Link ("Nowhere in Africa") has adapted the bestseller of the same name sensitively and extremely effectively for the screen. Especially regarding the freedoms she took away from it, but also regarding the probably saddest part of the story, she closely agreed with Kerkeling, who otherwise didn't interfere in the production. He knew his story was in good hands with Link - and with this attitude, he's in perfect hands.

The award-winning filmmaker manages very well to bring the early 1970s to life authentically, whereby sets, music and fashion are almost never used with the usual "Look, the 70s were so funny" penetrance, but rather build up an atmospheric 70s feeling through restraint. Only in one scene does the camera capture a typical Seventies curiosity a little too obviously. In this atmospheric setting, a story unfolds that Caroline Link tells with a balanced mixture of humour and drama.

The freedoms she takes in the process are all too obvious in a scene. The fact that Hape Kerkeling already invented his later cult figure Horst Schlämmer as a toddler during a school performance does not of course correspond to the truth - but in the cinematic context of the story it simply fits too well. What makes the movie work really well, though, is the way Kerkeling's mother deals with her suicide. Link has shown a sensitivity that not only pays respect to the protagonists of her film and their real role models, but also provides a powerful emotionality far away from any form of kitsch. As amusing as the biographical film may be in some places, it really moves us to tears here.

This is also due to actress Luise Heyer and her young colleague Julius Weckauf, who proves to be a real stroke of luck. The boy is simply great and can convince both as a born entertainer with a mischievous twinkle in his eye as well as in scenes that sometimes demand a very subtle sadness from him. Actors, direction, music and equipment - all this makes "The boy must go out and get some fresh air" a wonderful feel-good cinema to laugh and cry about. A beautiful film that more than lives up to the spirit of the original. Absolutely worth seeing!

Cinema trailer for the movie "The boy must go outdoors (Deutschland 2018)"
Loading the player ...