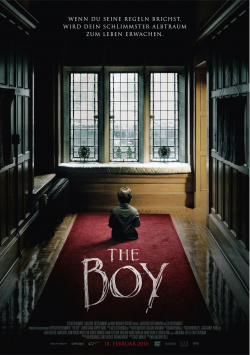 For young American Greta (Lauren Cohan), it's the perfect way to escape the beatings of her irascible ex-boyfriend: she takes a job as a nanny in Britain. She's happy to put up with the strict set of rules that Mr. and Mrs. Heelshire (Jim Norton and Diana Hardcastle) demand of her before she's even properly welcomed. After all, she's here to look after eight-year-old Brahms all by herself in the rambling manor house for the next few weeks while his parents are on holiday. But when she is introduced to the boy, Greta initially thinks it's a bad joke. For Brahms is not a real boy, but a porcelain doll. But when she realizes that the elderly couple is serious and that they really think the doll is their son, she begins to doubt whether this job was really such a good idea. Then again - babysitting a doll is easy money. After some doubts, she takes the job and looks forward to relaxing weeks. But it's not long before strange events begin to pile up in the old house and Greta is left to fear that Brahms may not be quite as lifeless as she first believed.

With The Boy, director William Brent Bell continues to move into the horror subject after Devil Inside and Who - The Beast in You. This time, however, he goes for more traditional scares without any big shock moments. And this works - apart from quite a few clichés and minor lengths - really well. While the first minutes, in which Greta receives the instructions from her new employers, how she has to behave in any case, are almost amusing, it becomes from the moment in which one begins to believe like Greta that the porcelain doll has a demonic life of its own, really nice suspense.

Lauren Cohan, familiar to genre fans from The Walking Dead series, of course, doesn't get to be much more than the usual scream queen in distress, but at least she does it with a certain aplomb that comes across well, especially in the final act. Rupert Evans (Hellboy) provides some nice laughs especially at the beginning with some good lines and quickly has all sympathies on his side. But even if the two actors carry the film for long stretches alone with a puppet at their side, the script allows them little opportunity to provide their characters with a real, interesting depth.

But since the atmosphere is right, this is only marginally negative. Because the film delivers fans exactly what they can expect from such a genre representative. Not more, but also not less. Until the last act. That's where opinions will differ. Of course, not too much should be revealed here. This much only: Even if the resolution isn't really new, it is surprising in a certain way. This surprise can be positive for some viewers, but at the same time it can also kill any form of suspense. It all depends on whether you expect a realistic or rather a supernatural explanation for the creepy occurrences in the house. Of course, I won't give away which variation it will end up being. But you should be prepared in advance to possibly be disappointed by the resolution.

Besides that, The Boy is an accomplished little scary movie that doesn't take itself too seriously while still providing a decent amount of suspense. For all fans of dignified creepiness and anyone who loves Lauren Cohan in The Walking Dead, a trip to the cinema can be thoroughly recommended. Worth seeing