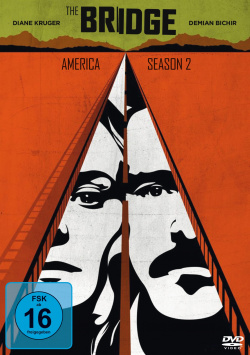 The Bridge - The Complete Season 2 - DVD

Film: After the dramatic events on the Bridge of the Americas between El Paso and Juarez, Mexican police officer Marco Ruiz (Demian Bichir) is a broken man. His son is dead and his wife has left him. Moreover, after he has brought to safety young Eva (Stephanie Sigman), who has been drugged and raped by several men, he is targeted by his own colleagues. For this heinous crime also involved police officers, whom Marco wants to bring to justice. At the same time, however, he himself is willing to make a deal with drug lord Fausto Galbani (Ramón Franco) in order to avenge his murdered son. After Galbani's enforcer is murdered in El Paso and Sonya Cross (Diane Kruger) is investigating the case, Galbani sends Ruiz to the States to work on the case with his American colleague. That's because the mysterious Eleanor Nacht (Franka Potente), who is also being hunted by the drug squad, is suspected to be behind the murder. Should they find Eleanor, Galbani could be hunted down as a result. And the drug lord wants to prevent that at all costs with the information Ruiz is supposed to provide him. And reporters Daniel (Matthew Lillard) and Adriana (Emily Rios) also get dangerously close to Galbani's drug cartel during their research around the Money House. An escalation of events seems unstoppable...

The huge success of the Swedish-Danish crime series The Bridge led to the 2013 US remake The Bridge - America. Although the first season stuck closely to the original at its core, the creators already tried to add their own impetus here by moving the story to the US-Mexico border. This succeeded very well and made this version exciting even for those viewers who already knew the original. Now, for the second season, they are finally going their own way. Completely detached from the developments in The Bridge, the events of the first season are continued and expanded. This works really well in some aspects. The fight against the drug cartel of Fausto Galbani and against corrupt police in Juarez offers enough material for exciting thriller entertainment. In addition, with the mysterious killer Eleanor Nacht, played by Franka Potente, a really interesting new character was introduced, who provides some of the most intense moments of the second season.

In other aspects, however, the independence only works to a limited extent. Most notably, this relates to the character of Sonya Cross. The idea of having her start an affair with the brother of the man who killed her sister isn't bad in principle. But what has made Sonya Cross (or rather, her role model Saga Norén) so special so far - her mild form of Asperger's syndrome coupled with a genius for deduction - is almost completely lost in the second season. Granted, there was never any explicit mention of Asperger's in the first season. Rather, Sonya's very specific behavior was explained by the trauma triggered by her sister's murder. And a tiny bit odd Sonya is even now. Still, much has been taken away from her that makes the character so special in and of itself. It almost seems like the creators were afraid that Sonya might come across as too undercooled or even unlikable to viewers, and so they've worked out her vulnerable, soft side in particular in the new episodes. But unfortunately, this makes the inherently interesting character too ordinary and interchangeable, from which the series as a whole suffers.

But apart from that, the second season of The Bridge - America leaves a consistently positive overall impression, despite some small lengths and dramaturgical hangs. The thirteen episodes build up a lot of potential for further exciting cases, which unfortunately can no longer be used. Because the interest of the viewers steadily declined, the series was discontinued with the end of the second season. Despite the minor weaknesses, this is a real shame, as the good cast, atmospheric camerawork, gritty storytelling and interesting development of characters such as Ruiz and Daniel make for some truly top-notch thriller fare that deserves a clear worthy watch even in its second (and final) year!

Picture + Sound: As with the first season, the DVD's picture captures the atmosphere of the series superbly. Warm, earthy, dirty tones dominate the action here. Overall sharpness is at a high level, and especially in the brighter outdoor scenes, the detail presentation is also absolutely convincing. For a current TV series, this is more than satisfactory. The Dolby Digital 5.1 mix is dominated in many moments by the rather centrally mixed dialogue, but every now and then smaller and larger sound effects ensure that audible life comes into the surround range. Good!

Extras: As a bonus, there is to each episode a brief look at the creation of the respective episode (each approx. 3 - 4 min.). Also, on the fourth disc, there are three dropped scenes (approx. 5:38 min.), a special about the second season and the breakaway from the original (approx. 10:25 min.), and about the making of the series (approx. 5:55 min.). These promo clips are too short to reveal a deeper insight into the production, but offer some thoroughly interesting information, which is why there is a satisfied worth watching here!

Conclusion: The Bridge - America also offers thrilling thriller entertainment in its second (and unfortunately also last) season, whereby the series very clearly breaks away from the Swedish-Danish original in these episodes and goes its own way. Good actors, exciting scripts and a very engaging visual style make The Bridge - America absolutely worth watching, despite some minor weaknesses. On DVD, the series presents itself in coherent picture and sound quality. The bonus material is a bit more meager than the first season, but is overall quite okay. Overall, this is enough for a satisfied: Recommendable