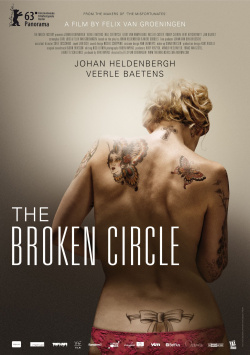 Although Elise (Veerle Baetens) and Didier (Johan Heldenbergh) are actually completely different people - he a romantic atheist, she a devout realist - it is love at first sight when Elise meets the musician in her tattoo studio. It is the beginning of a great love story, as the two harmonize perfectly not only in their private lives, but also on stage. Elise's voice makes the performances of Didier's bluegrass band something very special. It is a happiness that is completed by the birth of their daughter Maybelle. But when the little girl becomes seriously ill at the age of six, the couple's perfect, ideal world threatens to collapse completely.

With The Broken Circle, director Felix van Groeningen (The Crappiness of Things) has created a very poignant, but in many moments also beautiful drama that blends humor, romance and extreme sadness in a very natural way to create a truly special whole. The convoluted narrative, through which Elise and Didier's love story is told in flashbacks, and the use of bluegrass music seem a bit unusual at first. However, the narrative structure proves to be a very wise decision, as it prevents the viewer from being crushed by the dramaturgical weight of some aspects of the story. Through the interspersed flashbacks the events are loosened up again and again, so that the viewer can relax again and again. Moreover, the fate of the couple gets a much greater emotional impact, as it is shown again and again how beautiful and carefree their life together still was at the beginning.

And the bluegrass music is also an extremely important part of the story, as the sometimes very happy, then again rather sad songs express the feelings that Elise and Didier would otherwise rather suppress or simply cannot put into words.

In some moments, The Broken Circle is indeed very reminiscent of the French drama Life Belongs to Us in its theme and structure. But despite some clear parallels, Felix van Groeningen has succeeded in creating an entirely original work with a very individual tone. The adaptation of the play, co-written by lead actor Johan Heldenbergh, is certainly not light entertainment cinema, even if many scenes in themselves give that impression. Especially in the last third, the film has some very depressing moments to offer, which also raise very difficult but important questions about how to deal with grief and with the dignity of dying people. Still, van Groeningen manages the feat of not letting the viewer leave the cinema depressed or distraught. The film has a long lasting effect, but not only with its sadness, but also as an ode to the beauty of life and love. A very intense work, with good actors, a moving story and its great soundtrack, a real must-see for all friends of European arthouse cinema. Absolutely worth seeing!

Cinema trailer for the movie "The Broken Circle (Belgien/Niederlande 2012)"
Loading the player ...