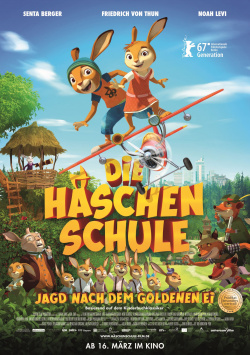 The Bunny School - Hunt for the Golden Egg

Even almost 100 years after its publication, The Bunny School by the poet Albert Sixtus is one of the most popular children's books ever, especially during the Easter season. Even if the texts, written in verse, now seem rather antiquated, the drawings are simply timelessly beautiful. And since many children are still familiar with The Bunny School, it was only natural to turn the book into a colorful animated film. The story of the adaptation, however, has little in common with the book. The focus is on the cool city bunny Max, who by chance finds himself in the bunny school located in the forest. Time seems to have stood still here, because the customs here are completely different from what Max knows from the city. It's just too bad that he can't get away so easily, because the hungry fox family is waiting behind the protective hedge. But then the wise teacher Madame Hermine learns that Easter is in danger. And now it's Max, of all people, who could save Easter and the other bunnies - if only he believed in himself.

The Bunny School - Hunt for the Golden Egg is quite a nice animated film for small viewers that aims to convey the usual themes of friendship and tolerance. Director Ute von Münchow-Pohl tries to combine the characters of the book with new, contemporary characters/elements to create an exciting as well as funny film for children. She succeeded quite well in parts, even if some elements of the story seem a bit too forced. The characters are drawn very stereotypically. This is especially true for Max, who exactly fits the cliché adults have of a cool city kid. This may not bother the target audience, but ultimately ensures that the film lacks the very charm that gave the book its timeless character.

The animations are deliberately kept rather simple so as not to overwhelm younger children. And even when things get a bit more exciting, it always stays within the bounds of what is bearable for children. In addition, the purposeful use of humour ensures that it never gets too exciting for the little ones. The story is told in a relatively compact way, so the running time is also only just over 70 minutes - also a very child-friendly decision. So, despite some dramaturgical weaknesses and quite a few clichés, this bunny adventure has become a really nice work for viewers between 5 and 8 years, which consoles over its weaknesses with some nice ideas and a successful ending. Worth seeing

Cinema trailer for the movie "The Bunny School - Hunt for the Golden Egg (Deutschland 2016)"
Loading the player ...