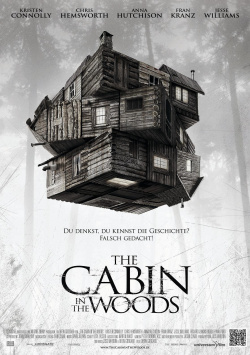 The Cabin in the Woods

It starts out like any typical horror slasher: along with her friends, athlete Curt (Chris Hemsworth, Thor), sexy Jules (Anna Hutchison), well-read Holden (Jesse Williams), and stoner Marty (Fran Kranz), kind-hearted Dana (Kristen Connolly) goes on a weekend vacation to a remote cabin in the woods, far from civilization. And of course, along the way, they encounter a grim hillbilly who predicts the good-humored kids' imminent demise. And sure enough, after their first drug binge and a little sex, the first bloody murder occurs. It all seems to go exactly according to the manual for slasher movies. But there's a whole other story going on in the background, one in which Dana and her friends play a central role - but in a very different way than they initially believe.

Drew Goddard and Joss Whedon (The Avengers), who have worked together on Whedon's TV series Buffy and Angel, deliver perfect proof with the screenplay for The Cabin in the Woods that it is possible to find new and surprising sides to the well-worn horror genre after all. Goddard, who delivers his more than successful directorial debut, plays with all the clichés of the subject in a wonderful way, so that the viewer is always lured on the wrong track. There will hardly be a viewer who can guess at the beginning where the journey will lead to in the end. And that's exactly the reason why you should avoid to find out too much about the story and the numerous plot twists in advance. Because the film thrives on its moments of surprise, unexpected gags and even more unexpected moments of shock. This gives The Cabin in the Woods an extremely high fun factor that would be a real disservice to spoil.

Often the film is compared to Wes Craven's Scream, which was also considered a revolution in the horror genre at the time. As obvious as the comparison may be, although both films ultimately go in very different directions, it can be rightly doubted that The Cabin in the Woods will have as lasting an effect on the genre as Scream did. This is truly not due to the quality of the film. Rather, it's the fact that Scream, as a concept, was much easier to copy and apply to other films than The Cabin in the Woods is likely to be. Sequels or copies would hardly work, if at all, due to the very particular nature of the plot twists. True, there are definitely some moments, especially in the last third, and a very special factor within the story that would make a sequel or spin-off or prequel possible. And yet, the film works so well precisely because it tells a self-contained story that works because of its very special originality - even on multiple viewings.

The wonderful acting of Richard Jenkins and Bradley Whitford, about whose roles nothing else will be revealed here, of course, the mixture of loving play with genre clichés and with the audience's expectations, bitter sarcasm, amusing wordplay (those who know Whedon's previous works will always be able to recognize his typical style, especially here) and bloody effects of the particularly over-the-top kind make The Cabin in the Woods the best, most original and most amusing horror film since Tucker and Dale vs. Evil. It's a real surprise that's just plain fun from the first minute to the last. And for that, we'll give it a: Absolutely worth seeing!!!

Cinema trailer for the movie "The Cabin in the Woods (USA 2012)"
Loading the player ...