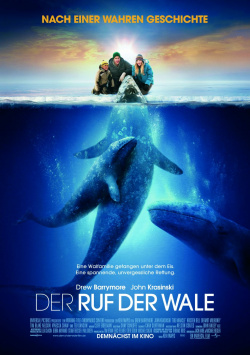 The Call of the Whales

It was a story that made headlines around the world in 1988: a family of gray whales were trapped in the ice in northernmost Alaska, facing certain death if humans failed to rescue them. Such a story is, of course, the stuff of Hollywood dreams. And so it's no wonder that it provided the template for an almost fairy-tale family film, for which director Ken Kwapis (He Just Doesn't Like You) has blended fact and fiction into a surprisingly entertaining whole.

Young reporter Adam Carlson (John Krasinski, Away We Go) is stuck somewhere on the northernmost tip of Alaska, shooting short reports about the lives of the people who live there. The fact that he'll soon be allowed to leave doesn't really make him sad, even if he can't bring along a really exciting story with which he could then apply to a major news station. But then Adam and eleven-year-old Nathan (Ahmaogak Sweeney) make an incredible discovery: three gray whales are trapped in the ice, desperately trying to keep a small air hole open. The way out to sea is cut off and the whale family is in danger of dying miserably. When Adam sends the story to his radio station, the news hits like a bomb, and not just in the USA. Numerous media representatives travel to the small town to report on the fate of the whales. And animal rights activist Rachel (Drew Barrymore), Adam's ex-girlfriend of all people, also wants to help. But all efforts seem in vain. Only when oil tycoon J.W. McGraw (Ted Danson) gets involved in the matter to polish up his image, which has just been tarnished in environmental matters, is there a small glimmer of hope for the animals again.

The Call of the Whales may be based on true events. This fact is further emphasized in the film by the fact that images of the film characters' real-life models are shown during the credits. Nonetheless, the film's take on the events of 1988 is a genuine cinematic fairy tale, with a few clichés and a big dollop of kitsch to keep the feel-good factor high. Kwapis has drawn the characters with such uninhibited charm that you'll want to pack your bags immediately and join this likeable bunch in Alaska. And even if Kwapis can be accused of a certain superficiality, his mix of drama, comedy and romance works really well.

While the fate of the whales makes for some arguably sentimental moments, while also providing a quite wonderfully photographed scene, the occasionally very quirky characters and dry wordplay always lighten up the dramatic proceedings. And the little love triangle between Adam, Rachel and the ambitious reporter Jill (Kristen Bell) provides comforting warmth in cold Alaska.

The Call of the Whales truly cannot be called sophisticated cinema. After all, Kwapis manipulates his audience too obviously for that. But as pure feel-good cinema, as charming Hollywood entertainment with a somewhat old-fashioned touch, the film works just fine. Likeable actors, a lot of humor and a lot of heart make this movie absolutely worth seeing

Cinema trailer for the movie "The Call of the Whales (USA 2011)"
Loading the player ...