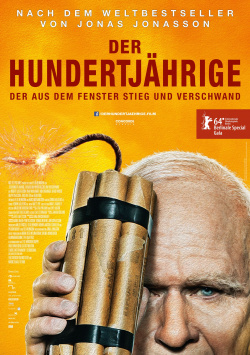 The Centenarian Who Climbed Out of a Window and Disappeared

With his debut novel The Centenarian Who Climbed Out of a Window and Disappeared, Jonas Jonasson has landed a real surprise hit, and not just in his native Sweden. In 35 countries, the most original history lesson since Forrest Gump stormed the bestseller lists. In Germany alone, the book sold over 2 million copies and spent an impressive 32 weeks at the top of the Spiegel bestseller list. So after an audience of millions watched Allan Karlsson climb out of a window and disappear, the quirky centenarian has now reappeared to continue his triumphant progress on the big screen.

Allan Karlsson (Robert Gustafsson) can't really be happy about turning 100. He just vegetates in the dreary old people's home and can imagine much nicer things than letting the obligatory birthday party wash over him. And so he decides without further ado to make off through the window and set off from the local bus station on what may be his last adventure. But the old man cannot yet imagine how adventurous this journey will really be. But before he knows it, he is in possession of a suitcase full of mafia money, has to dispose of a body and meets new friends on the run from the home's management, the police and the mafia. To these, in the course of their journey together, Allan recounts his eventful life, in which, by chance, he has played a not insignificant role in some drastic political events, completely unknowingly. And even after a hundred years, there is simply no peace in Allan's turbulent life.

With his adaptation of The Centenarian Who Climbed Out of a Window and Disappeared, Swedish filmmaker and comedian Felix Herngren has fully lived up to the extremely high expectations of audiences due to the book's popularity. In Sweden, the bestseller adaptation became the most successful film of all time. With Robert Gustafsson, convincingly transformed into a centenarian thanks to the good work of the make-up artists, Herngren has found a truly wonderful leading actor who transports the very idiosyncratic character of Allan Karlsson well from the book to the screen. With many moments of very wry humour and effective situational comedy, the film manages very well to provide its audience with just under two hours of light and very charming entertainment.

Despite necessary tightening and cuts, the story is coherently and originally told, some scenes are genuinely incredibly funny and the troupe that Allan gathers around him during the course of his adventure are very sympathetically cast. But as much as The Centenarian likes to blow things up, there's nothing really explosive about the comedy. That The Centenarian Who Climbed Out of a Window and Disappeared is a successful film is as unquestionable as its entertainment value. But this bestseller adaptation doesn't offer much more than just nice entertainment. This will hardly be noticeable to viewers who have read and loved the book, since they already know what to expect and since they have already been immersed in the whimsical world of old Sweden. However, those who don't know the novel and only noticed its great success might be a bit surprised after watching the movie that there is such a hype about this pensioner.

But even if the most successful Swedish movie of all times really didn't become the best movie of all times or the best movie of the year, it definitely offers a lot of fun and enjoyment to its viewers. And that also justifies the maybe a bit exaggerated praise, because the moviegoers get to see lovable entertainment with heart and mind for their money. And when you step out into real life with a satisfied smile at the end, the last thing you'll be bothered about is the fact that the movie just hasn't become a masterpiece, but merely finest entertainment cinema of the especially charming kind. And for that you get a more than satisfied: Absolutely worth seeing - not only for centenarians!

Cinema trailer for the movie "The Centenarian Who Climbed Out of a Window and Disappeared (Schweden 2013)"
Loading the player ...