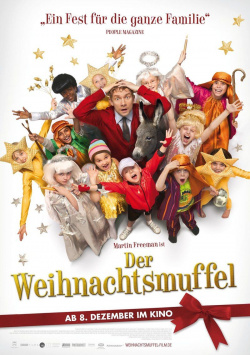 Once upon a time, elementary school teacher Paul (Martin Freeman), Jennifer (Ashley Jensen) and Gordon (Jason Watkins) were a well-oiled team. But as Paul and Jennifer became a couple, jealousy grew in Gordon, which, when the two separated five years ago, culminated in an unrelenting rivalry between Paul and Gordon. Every Christmas, Gordon puts on the most elaborate productions of the Christmas story, while Paul takes a rather lackadaisical approach at his school. After all, ever since Jennifer ditched him on Christmas of all days, he's been a downright Christmas mope. But this year, Paul has had enough. He unceremoniously claims that this time his Christmas musical will be so spectacular that even Hollywood will come to Coventry. After this completely bogus claim, the little town is upside down. Everyone is convinced that their child is in for a big career in Hollywood. And Paul, with the help of the unconventional assistant teacher Mr. Poppy (Marc Wooton), must now try to straighten out his mistake without losing face in front of Gordon or in front of his pupils...

The Christmas Grumpy is a musical Christmas comedy for children and all who are looking for British humour of a somewhat simpler, but not uncharming kind. Director Debbie Isitt (Confetti), who is currently working on a sequel to this festive fun, mixes catchy musical numbers with child-friendly gags that are at times very amusing, at other times threaten to degenerate into unrestrained silliness. The kids act a bit over-the-top at times, but overall possess an infectious charm that makes the film very amusing, especially during the grand finale performance.

Well chosen, too, is Martin Freeman, who hit the big screen in 2012 as the hobbit Bilbo Baggins. As a curmudgeonly schoolteacher whose broken heart has caused him to lose all desire for Christmas, Freeman (Sherlock) provides some really good laughs, especially in the first third of the comedy. At the same time, he's also a great sympathetic character, which pays off especially during the finale.

Other characters on the other hand, but especially arch-rival Gordon Shakespeare and the dorky Mr. Poppy, are portrayed arguably overdrawn. Mr. Poppy in particular is clearly aimed at a younger audience with his rather infantile jokes. Adults, however, are likely to be quickly annoyed by this character.

In England, The Christmas Grouch was a resounding success. Both the film and the catchy soundtrack made it into the upper chart regions and the DVD release a year later also proved extraordinarily profitable. That's why a second part may now also be launched in 2012 - albeit without Martin Freeman. But since he is one of the reasons why the film still works despite its obvious weaknesses, it may be doubted that the next Christmas grumpy will again provide a good mood. Even though this first part doesn't really have what it takes to be a potential Christmas classic and a lot of potential is given away, some nice and very amusing moments provide a festive mood and make sure that the viewers get warm around the heart. Merry Christmas

Cinema trailer for the movie "The Christmas Grump (Großbritannien 2009)"
Loading the player ...