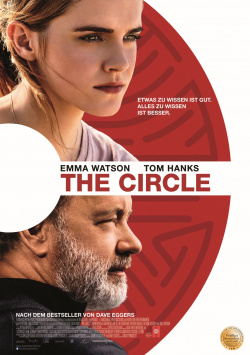 Mae Holland (Emma Watson) can hardly believe her luck: she has landed a job at The Circle, the most powerful Internet company in the world. Thrilled by the high-tech premises, state-of-the-art equipment and friendly colleagues, Mae throws herself into work and soon catches the attention of company founder Eamon Bailey (Tom Hanks). He sees the young woman as the perfect candidate for a grand experiment that would require Mae to accept 100 percent surveillance of her daily life. Realizing that she could be part of a groundbreaking development in Internet technology, Mae agrees - unaware of the consequences it will have on her own life, as well as those of her family and friends.

The Circle is based on the acclaimed novel by Dave Eggers. What may read like a fantasy story at first turns out, on reflection, to be a frighteningly realistic vision of a not-too-distant future. Considering how easily people share their most private information with the world via social media, it's not so far-fetched to think that many would be willing to completely give up their privacy for clicks and likes. If this is then packaged in such a way that it is done for the good of humanity, because, say, terrorists or criminals could be found anywhere in the world in just a few minutes and brought to their just punishment, then we would probably expect to see frighteningly little resistance from the general population to such a system in reality as well.

Why the film works so well is not just because it recreates a certain scenario quite believably. It's also because Steve Jobs clone Eamon Bailey is drawn not as a stone-cold monster, but as an extremely charismatic visionary. Sure, ultimately he too is about money and satisfying his ego. And yes, he has dirt on him, too. But he also has reasons for his actions that are perfectly understandable and honorable. This is important because the viewer, like Mae, is supposed to ask himself if Eamon might not be right after all and if his technology would not be a curse but a blessing for mankind. The fact that the boundaries between right and wrong seem to blur here again and again makes the story extremely exciting, despite some lengths and logic holes until the end (which is quite different from the one in the book).

Tom Hanks is perfectly cast as a charismatic high-tech billionaire and Emma Watson is also convincing as an initially naive, but then more and more calculating young woman. The film is also visually engaging. As you walk around the company grounds, you actually find yourself wanting to work here too, knowing full well that appearances are more than deceptive. Admittedly, a lot more could have been made of the premise. But even if not every element of the production works, the bottom line is that The Circle has become a really compelling thriller that actually makes you think a little bit about giving up your privacy on the internet: What am I willing to give up to make the world a safer and better place? Absolutely worth watching!