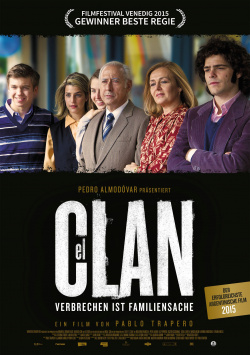 Argentina in the early 1980s: The family of Arquimedes Puccio (Guillermo Francella) seems to be a normal upper middle-class family. The son Alejandro (Peter Lanzani) is a successful player on the national rugby team, the small family business runs smoothly and in the neighbourhood the charming patriarch is well known and popular. What no one suspects: behind the quiet facade Arquimedes runs shady business. With kidnappings, ransom extortions and murder he brings in a lot of money for the family. But to keep up appearances, he must be able to rely completely on Alejandro. But the more Alejandro strives to lead his own life and thus also casts doubt on his father's business dealings, the more he causes the clan's clean facade to crumble.

El Clan was the most successful Argentine film of 2015 in its home country. Good actors, a story that is thrilling and emotionally involving at its core, and a perfect 80s feel to the music, décor and imagery are probably some of the reasons why. Based on the true story of the Puccio clan, director Pablo Trapero has not only crafted a classic gangster thriller, but also a moving family drama and a realistic-looking morality tale of an Argentina between dictatorship and democracy, marked by corruption and economic decline.

What makes this film special is its rather low-key production. Trapero refrains from much action or big shock moments. Instead, many events are told with an almost matter-of-fact sobriety that is even understood with a dash of black humor here and there. There doesn't seem to be any increasing dramaturgy, which can definitely lead to some small lengths in the first hour of the movie. At the same time, this supposed calmness has a completely different side effect. The viewer is - similar to the protagonists - relatively surprised by the events of the last act. What happens here seems very intense due to the calm narrative flow. Thus, some of the images of the last minutes stick with the audience longer and the film gets a lasting effect that might have been denied to it otherwise.

For all in all, El Clan is a good, but not an outstanding gangster epic. For that, large parts of the production simply lack the final bite. Trapero takes too long to build up the story without any real climaxes until he shows what intensity is actually in it. Nevertheless, there are enough positive aspects that make this work absolutely worth seeing for lovers of classic mafia stories

Cinema trailer for the movie "The Clan (Spanien/Argentinien 2015)"
Loading the player ...