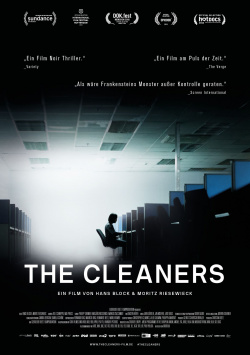 The Internet is part of everyday life for most of us. Millions of people are connected through social networks. This can be a beautiful and positive thing, but it also carries enormous dangers. Agitation and hate comments are unfortunately no longer an exception, but they are also just the tip of the iceberg. There are unbelievably many sick, cruel and also dangerous things that you can find on the net. It goes without saying that there has to be a certain level of control. But what criteria are used to censor or delete comments, photos or videos on various social platforms? Who decides on this and who actually has to look at all these terrible things to then decide on deletion or whereabouts?

The documentary The Cleaners tries to get to the bottom of these and other questions. Facebook, in particular, gets a close look. But also YouTube, Google and Co. are part of this in parts very effective documentary, which in parallel to the general revelations also presents the work of five (former) content moderators from Manila, the world's largest outsourcing location for content moderation. And as a viewer, you learn some very shocking things - even if none of them should really come as a surprise. Because the fact that censorship is used, among other things, to influence opinions and to deliberately sow lies, hatred and prejudice is really not a conspiracy theory.

But what influence do social networks really have on our society? To what extent are users responsible and what role do the powerful bosses of Facebook, Twitter and co play? Can a tweet really become a political incendiary? And when does a Facebook post become so dangerous that censorship takes hold? Hans Block and Moritz Riesewieck try to shed light on these dark sides of the Internet as objectively as possible. However, in doing so, they pick up on so many topics, theories and facts that the result is a somewhat confusing web in which the filmmakers themselves seem to have gotten a little tangled.

Totally, the intention of The Cleaners is very good and some aspects are also of immense importance. They should be discussed much more and consistently. But unfortunately the production is sometimes a bit too convoluted and overloaded, that you wonder as a viewer what the filmmakers actually want to get at. A quite important documentary with a few weak points and therefore also only with small restrictions worth seeing!

Cinema trailer for the movie "The Cleaners (Deutschland / Brasilien 2018)"
Loading the player ...