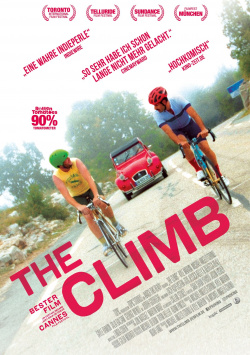 Kyle (Kyle Marvin) and Mike (Michael Angelo Covino) are best friends who have been together through thick and thin for years. But then Mike opens up to his buddy during a bike ride that he's been sleeping with Kyle's fiancée for some time. This seems to be the end of a long friendship. But a stroke of fate brings the two men back together some time later and Kyle, who has found a new love in the meantime, lets Mike back into his life. A few turbulent episodes follow, in which Kyle regrets his decision more than once - but in the end, friendship always seems to win out.

Based on the short film of the same name, Michael Angelo Covino has made The Climb, a wonderfully quirky film about a true male friendship. An American indie gem with plenty of French flair - that's unusual enough in itself. But when you add singing gravediggers or spontaneous dance interludes to the mix, it's a real rarity. Admittedly, the film doesn't have a stringent story. It rather jumps into different episodes that span over several years. Sometimes you attend a Thanksgiving dinner at Kyle's family, sometimes you're an onlooker at a ski vacation, and then again you watch the friends ice fishing for their bachelor party.

The dialogues, which like the rest of the film tend to be infused with wry humor, sometimes seem improvised, providing more of a well-groomed permanent smirk than outright big laughs. The production clearly benefits from the fact that the two main actors and screenwriters Michael Angelo Covino and Kyle Marvin are also best friends in real life. The chemistry between the two is perfect and the way they pass the comedic balls to each other is just great.

It must also be said, however, that this festival favorite, which won the Prix Coup de coeur at Cannes in 2019, has a depressing side as well as a humorous one. There's also something destructive about the friendship between the men, which adds a certain weight to the proceedings. So then, it's quite possible that some viewers won't necessarily see the ending in a positive light, but will see it as Kyle simply not being able to be happy as long as Mike plays a role in his life. From this point of view, the whole thing would then not be a paean to long-lasting friendships, but a bitterly wicked look into the abyss that unconditional friendship can bring.

Either way, The Climb is a truly original film with a charm all its own that fans of slightly offbeat, yet never raunchy indie comedies should definitely check out. A definite case of: Worth seeing!