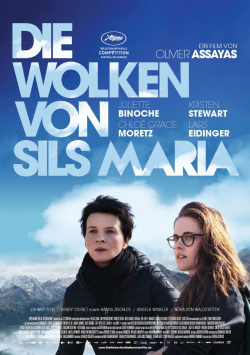 The Clouds of Sils Maria

Twenty years ago, the actress Maria Enders (Juliette Binoche) celebrated her big breakthrough with the role of the seductive young Sigrid. Shortly after the death of the man who had written the role for her at the time, Maria receives an unexpected offer: she is to play the role of Helena, the character who drove her to suicide as Sigrid two decades ago, in a new interpretation of the play. The character that made her famous is to be played by Hollywood starlet Jo-Ann Ellis (Chlo&euml; Grace Moretz). At first Maria is not at all enthusiastic about the idea of being on stage again for this play after twenty years, but then lets herself be persuaded by the dedicated director Klaus Diesterweg (Lars Eidinger) to maybe do it. With her assistant Valentine (Kristen Stewart), she retreats to the solitude of the Alps of Sils Maria to rehearse the play, but quickly finds that she is confronted with far more here than just her artistic past.

The Clouds of Sils Maria is a drama about the transience of youth and about letting go of the past, spiced with some satirical asides to the acting circus dominated by outsized egos. Director Olivier Assayas (Carlos - The Jackal) places three very different women at the centre of the story. Working on the play, each of these women undergoes a fundamental change, with the levels of appearance and reality becoming more and more blurred. The play intrudes more and more into reality, and by the end seems to take over it almost entirely. Shot against the fascinating natural backdrop of Sils Maria in Switzerland, in Sankt Moritz and also in South Tyrol, the film is able to build up a very special atmosphere, which, however, cannot hide many a length.

No question, the drama is very well acted. Juliette Binoche in particular is really excellent as the celebrated actress who has to deal with her past and thus her lost youth. Kristen Stewart is also completely convincing as her loyal assistant, because her nature just fits the role very well. And finally, Chlo&euml; Grace Moretz is truly wonderful as the scandalous girl a la Lindsey Lohan. Acting-wise, the film has some quite great moments to offer, superbly supported by the iconic imagery. Still, more than once there is a feeling that this story could have been told in considerably less than two hours. Assayas keeps getting lost in long takes and scenes that just seem to go in circles. What his screenplay is getting at is soon clear. There's no need to have the symbolism slapped around your ears over and over again.

It doesn't help much that the characters themselves aren't really likeable. For example, some viewers may well find themselves simply annoyed by the ever-increasing bickering between Maria and Valentine, who eventually stands up to her in the face of her somewhat diva-like behaviour. Certainly, there are some very intriguing facets to the story that are worth thinking about more deeply, even in the end. Nevertheless, The Clouds of Sils Maria is a bit too much and not enough captivating cinema fare, which can only be recommended to lovers of visually stunning arthouse fare and multi-layered women's stories. For these viewers then also applies: Worth seeing!

Cinema trailer for the movie "The Clouds of Sils Maria (Deutschland/Frankreich/Schweiz 2014)"
Loading the player ...