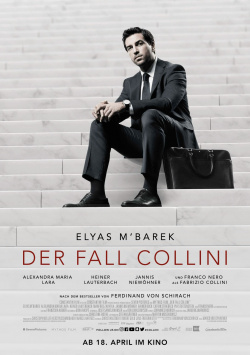 For young lawyer Caspar Leinen (Elyas M'Barek), it sounds like a spectacular start to his career: he is to prosecute 70-year-old Italian Fabrizio Collini (Franco Nero), who killed respected industrialist Hans Meyer (Manfred Zapatka) for seemingly no reason. Caspar only learns the identity of the victim after he has already taken the case. And that becomes a real problem for him, because Meyer was always something like a father to him. Now he has to defend the murderer of his surrogate father, the grandfather of his childhood sweetheart Johanna (Alexandra Maria Lara) - and in doing so, he must also compete against his former professor, the criminal defense legend Richard Mattinger (Heiner Lauterbach). With Collini persistently silent, the case seems lost for Caspar before the trial has even begun. Nevertheless, the lawyer sets out to investigate the background - and stumbles upon a terrible secret and one of the biggest judicial scandals in post-war German history.

The Collini Case is based on the bestseller of the same name by Ferdinand von Schirach. The adaptation by Marco Kreuzpaintner (Krabat, Beat) may be a bit too conventional and in places even too clichéd, especially for connoisseurs of the successful book template - of which I am not one. But all in all Kreuzpaintner has staged a really gripping judicial thriller, which cleverly combines a fictional story with actual facts from German judicial history. The background to this is the so-called Dreher Law, which left numerous Nazi crimes unpunished. The story about the murder of a seemingly blameless industrialist puts a finger in this wound of German post-war history in a stirring way.

You can already call it a gamble that Elyas M'Barek was chosen for the lead role. Not that the actor has already proven his changeability in numerous films. But since the enormous success of Fack Ju Göhte, he has been confined to a certain type of role, from which the character of Caspar Leinen is fundamentally different. That he masters this transformation convincingly comes as no surprise, but does not necessarily correspond to the expectations with which many viewers now go into a film in which M'Barek plays the lead.

In some moments, the production seems perhaps a little too worn and too dry. So in the course of the approximately two hours running time here and there small lengths arise. But all in all, The Collini Case is well-acted, atmospherically dense and suspensefully narrated cinema entertainment that also makes you think. Who can overlook a few clichéd characters and a few tough moments, for this bestseller adaptation is then also: Absolutely worth seeing!

Cinema trailer for the movie "The Collini Case (Deutschland 2019)"
Loading the player ...