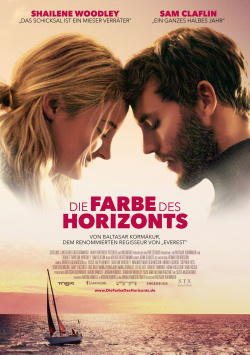 The Color of the Horizon

It seems like the beginning of a romantic fairy tale when young Californian Tami (Shailene Woodley) and smart sailor Richard (Sam Clafin) meet in Tahiti in 1983 and fall head over heels in love. Together, the two plan to explore the world and enjoy life. But then Richard agrees to a lucrative offer to ferry a couple's boat back to California. Tami allows herself to be persuaded to accompany him. But suddenly what started out so wonderfully turns into a nightmare when Tami awakens after a hurricane and finds herself alone on the badly damaged boat.

The Color of the Horizon recounts the true struggle for survival of Tami Oldham and Richard Sharp. Director Baltasar Korm&aacute;kur (Everest) has deliberately chosen not to follow a linear narrative in adapting Tami Oldham's book about the events. It begins with Tami's awakening after the storm and then keeps jumping back and forth between two time levels. This gives the story an intensity that it would lack if it were told in a linear fashion. Had Korm&aacute;kur first dealt with the couple's getting to know each other, falling in love, and idyllic times, boredom could easily have set in. However, the fact that he mixes these light-hearted moments with the desperate struggle for survival imbues them with a certain tragedy that is vital to the emotional impact of the film as a whole.

Sure, there are a lot of clichés being served up here, and despite the rather tight running time, a few longueurs do crop up here and there. But overall, this survival romance can score with great visuals, a strong Shailene Woodley and some small surprises. Especially viewers who are not familiar with the real background might be really touched by one aspect of the story. So the story is particularly effective just in the way it is told, even if strictly speaking it doesn't really give much away - apart from the fact that it is based on true events.

Beautifully filmed, well acted and engagingly told for long stretches - these are the ingredients that set The Color of Horizons apart from the average and make it a high seas romance really worth watching. No masterpiece, but solid entertainment and therefore also: worth seeing!

Cinema trailer for the movie "The Color of the Horizon (USA 2018)"
Loading the player ...