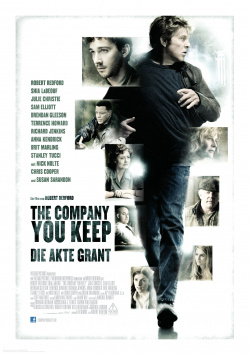 The Company you keep - The Grant File

When former star Robert Redford calls, they all come. And so it's no wonder that the 77-year-old's latest directorial effort then boasts an ensemble cast that's great down to the smallest supporting roles. Shia LaBeaouf, Susan Sarandon, Julie Christie, Terrence Howard, Susan Sarandon, Nick Nolte, Chris Cooper and Brendan Gleeson are just a few of the prominent and often award-winning faces who do the honors in this exciting thriller. With a superb script by Lem Dobbs (Dark City, Haywire) and engaging imagery, Redford's The Company you keep - The Grant File tells the story of a man who, after thirty years, is caught up with the demons of his past.

Long ago, lawyer Jim Grant (Robert Redford) was allegedly responsible for a murder as a member of a radical activist group. Since then, he and the other members of the group have been on the FBI's wanted list. When investigator Cornelius (Terrence Howard) and his team score a first strike against the former activists, arresting Jim's old companion Sharon (Susan Sarandon), single father Jim realizes he won't be able to live in safety much longer. He must go into hiding while finding evidence that will exonerate him so his daughter doesn't have to grow up without him. While Jim tries to activate old contacts, a young reporter named Ben (Shia LaBeouf) also becomes aware of the case as a result of the arrest. Hoping to make a big leap forward on the career ladder, Ben attaches himself to Jim's heels, not suspecting what dangerous dimensions this case will take.

The Company you keep - The Grant File is based on a novel by Neil Gordon, who has processed in it many meticulously researched facts. But even if the story is based on real events, it is still pure fiction. However, Redford has staged it in an extremely exciting and thrilling way, giving the whole thing a pleasantly timeless flair. On the one hand, this means that the film seems old-fashioned in the best sense of the word, reminiscent of Redford classics like The Three Days of the Condor or The Incorruptibles. On the other hand, the film doesn't feel dusty, thanks primarily to the dialogue and the pace, which is leisurely but never too drawn out.

The story works particularly well as a thriller, with two men trying to uncover the truth about a deadly bank robbery thirty years ago for different motivations and with different goals in mind. But Redford also manages, in a very entertaining way, to confront the audience with questions that are worth discussing again, especially in this day and age. It is the question of how far resistance against the state may go, what means are justified for the implementation of one's political convictions and how thin the line between activism and terrorism can be.

The Company you keep - The Grant File is truly not a perfect film. For example, Redford himself seems ten years too old for the role of the father of a little girl who is a little too precocious. Also, the ending lacks a certain consistency, which one would have wished for after all the talk about ideals and convictions, for which sacrifices also have to be made. Nevertheless, Robert Redford has succeeded in making a very good thriller, which is extremely enjoyable in terms of acting alone and which tells its not always cliché-free story in an exciting and intelligent way. If you appreciate old-school conspiracy and political thrillers, don't miss this film. Worth seeing

Cinema trailer for the movie "The Company you keep - The Grant File (USA 2013)"
Loading the player ...