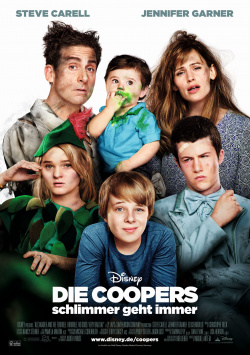 Eleven-year-old Alexander Cooper (Ed Oxenbould) is tired of his life being an absolute disaster, while the rest of his family is running perfectly. When he once again experienced a really bad day, he wished on his birthday that his family would also experience such a disaster day. And in fact this wish seems to come true: while during an important interview with his father (Steve Carell) everything that can go wrong goes wrong, a reading for children organized by his mother (Jennifer Garner) threatens to get completely out of hand. His brother Anthony (Dylan Minnette) has a fight with his girlfriend and his sister Emily (Kerris Dorsey) gets a bad cold on the day of a big school performance. And that's how this miserable day just started...

"Die Coopers - Schlimmer geht immer" is already the fourth adaptation of Judith Viorsts' classic children's book "Alexander und der mistige Tag". The first three adaptations, however, were only short films, not longer than 30 minutes, due to the small size of the original. Director Miguel Arteta ("Welcome to Cedar Rapids") has now tried his hand at the first feature film version. The result is a typical Disney family comedy of a particularly turbulent kind. There's a lot of chaos that's more about simply knitted slapstick than lifelike logic. Subtlety's definitely taking a break here. If you expect depth from the story or the protagonists or a certain deeper meaning from the humor, then you're in the wrong movie for sure.

If, on the other hand, you can get involved with the family-friendly humor in the style of the "Greg's Diary" movies, you'll get 81 quite entertaining minutes with some well done jokes. Surely, in some scenes it's almost sad to see Steve Carell gambling away his hard-earned reputation for some cheap jokes so soon after his well-deserved Oscar nomination. And also Jennifer Garner's over-exaggerated portrayal of the over-mutti and career woman holds many a moment of foreign shame. But it also can't be denied that they have some fun with these rather undemanding roles, which also makes their portrayals absolutely bearable. And the three young actors, who mime their children, do their thing quite well.

"Die Coopers - Schlimmer geht immer" (The Coopers - Worse Goes Always) is certainly not a milestone in family comedy. Miguel Arteta's production clearly follows Scheme F, without even once taking a risk or revealing signs of originality. But younger viewers in particular won't be bothered by that. Who likes very simple family entertainment with child-friendly slapstick and a good message will enjoy this chaotic day with the Coopers guaranteed. And for this audience there is also a good one with a lot of good will: Worth seeing!