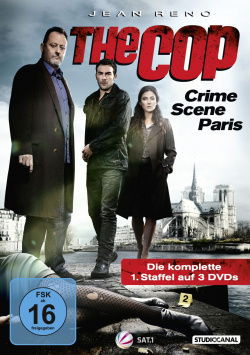 Film: Parisian cop Jo Saint-Clair (Jean Reno) is a master at putting himself into the psyche of killers. That's the way the investigator's solved a lot of homicide cases. His methods are unorthodox, but effective. But Jo's constant confrontation with the abysses of the human soul has left its traces behind - traces he has repeatedly tried to obliterate with alcohol and tablets. With the help of his confidante, the nun Karyn (Jill Hennessy), the policeman wants to make a new start, even alone, to improve the relationship with his daughter Adèle (Heida Reed). But the work with his team on mysterious and brutal murder cases makes this attempt enormously difficult. After all, Jo has a gift and he has to use it to make Paris a little safer. And so Jo, together with his colleague Marc (Tom Austen), tries to solve the murder of a photo model, the mystery of a burnt corpse or even the death of an organist in front of Notre Dame Cathedral and at the same time steer his life in an orderly fashion. Not an easy task for a man marked by life like Jo...

For his latest series creation "The Cop" the Canadian Rene Balcer, who has previously worked on series like "Law & Order" and "Criminal Intent", has gathered some great talents in front of and behind the camera. He had the eight episodes of the short first season staged by filmmakers who had previously directed top-class hits like "Kommissarin Lund", "Luther" or "The Walking Dead". And with the engagement of France's Kino-Export No. 1 Jean Reno, he has succeeded in making a real coup, which, however, puts the good supporting actors like Jill Hennessy ("Crossing Jordan") or Sean Pertwee ("Camelot") a little in the shade. Jo solves his cases as part of a team and also relies privately on the help of friends and colleagues. Nevertheless, the series is rather a one-man-show, which wouldn't work so well without Jean Reno.

The cases, which the cop often has to solve with his colleagues at the most beautiful landmarks of the city, are rather conventionally knitted. Especially those who regularly watch series from the "CSI" or "Law & Order" franchise will not be offered anything new or surprising during the investigations. But while in the first two episodes this seems to turn out to be a big weakness of the series, the makers manage to tighten the tension screw in the course of the show. Even though we continue to follow familiar paths here, the implementation of the stories increases significantly after the rather slow beginning. And also the development of the characters knows how to tie the viewer to the characters and their stories.

In the end, the eight episodes can leave a very positive overall impression both in acting and in their visual and dramaturgical implementation. Jo Saint-Clair is a very exciting character who can give Jean Reno exactly the depth and emotional abyss that such a character needs. He alone is reason enough to go on patrol through Paris with "The Cop". For fans of exciting and atmospheric crime thriller series absolutely worth seeing!

Picture + Sound: Technically, the eight episodes of the first season present themselves in good to very good TV quality. The image is absolutely clean, pleasing with a very atmospheric color scheme and a good image sharpness that makes even small details visible, especially in brighter moments. The sound backdrop presented in a Dolby Digital 5.1 mix consists in most moments primarily of the rather frontally mixed dialogues and the film music, but again and again harmonious ambient noises and smaller sound effects ensure good use of the surround channels. Good!

Extras: As a bonus the DVD only has the pilot episode of the series "King" to offer. It's worth seeing, but additional material that deals directly with "The Cop" would have been more desirable.

strong>Fazit: "The Cop" is a decent crime series, which gains in quality after a slow start. Although the series offers little that is dramaturgically new, it clearly benefits from the atmospheric settings in Paris and the unbeatable charisma of Jean Reno. Watching him do his investigation is just fun. If you don't expect a big revelation, but just want to see solid thriller entertainment with good actors and exciting cases, you shouldn't miss this series. Recommended