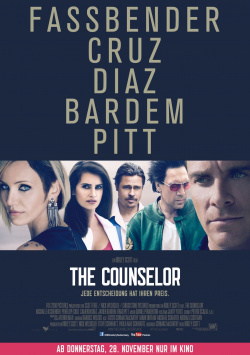 The life of the lawyer everyone just calls Counselor (Michael Fassbender) is headed for a happy climax when he gets engaged to his attractive girlfriend Laura (Pen&eacute;lope Cruz). He plans to do whatever it takes to make Laura happy. But that takes money. Money that the Counselor doesn't have. So he decides to get involved in a deal run by nightclub owner Reiner (Javier Bardem). The warnings of Westray (Brad Pitt), the middleman who is supposed to broker the not-quite-legal deal, are thrown to the wind by the Counselor, as are his doubts about the influence Reiner's manipulative girlfriend Malkina (Cameron Diaz) has over him. His usually sharp mind is too clouded by his love for Laura. Too bad, because when the deal goes bad, he completely loses his usual control over his life, putting not only himself but Laura in grave danger.

The Counselor brings together so many talents in front of and behind the camera that one is almost willing to dub the film a masterpiece, sight unseen. Because when master director Ridley Scott, the brilliant mind behind Alien, Blade Runner or Gladiator, takes a script by Cormac McCarthy (No Country for Old Men, The Road) and gets stars like Javier Bardem, Brad Pitt, Cameron Diaz, Michael Fassbender, Bruno Ganz or Penelope Cruz in front of the camera, then it can only result in something really great. If you go into the film with this expectation, you could be in for a bitter disappointment.

While there are some quite great moments, wonderful dialogue and great actors. In addition, the film looks really good - actually a matter of course for Ridley Scott. Still: the overall picture turns out rather muddled and completely overloaded than cleverly constructed and convincing. Certainly, a movie can benefit from not telling its story in a completely straightforward manner and challenging the viewer through a certain amount of convolutedness. But if at the end you completely lose track of the individual plot lines, can't understand the motivations of the characters and if the whole thing is then dragged out with unnecessarily long and strained provocative conversations about sex, then it's just hard to talk about a good movie despite the many successful aspects.

It gives the impression that Scott has concentrated on making individual scenes stand out particularly strongly, and that in doing so he has completely lost sight of the cohesion of these scenes with each other. For instance, a long conversation between the Counselor and Reiner, after which they will forever see sucking catfish through different eyes, does have some entertainment value. In the overall context, however, it makes no sense whatsoever and only serves to unnecessarily inflate the already dialogue-heavy events. There are many aspects that are genuinely successful in their own right, and in some cases downright great. Cameron Diaz's ice-cold, manipulative acting is just as much a part of it as Brad Pitt's character Westray's farewell. It's all the sadder that Ridley Scott didn't manage to create a gripping thriller out of all the good ingredients that is actually as clever as The Counselor pretends to be.

What good are great pictures, a rousing cut, convincing actors and a few good dialogue scenes if the viewer lacks any access to the characters and at the end you just wonder what the whole thing is about. It might be that there are some viewers who see the genius of this movie exactly in that and accuse critical voices like me that we just didn't understand the movie. And even if this should be true, it's hard to see the genius in this confusion, which the talents in front of and behind the camera promise. Therefore, if you attach more importance to the visual realization than to the content or if you like it a bit more confusing, you might be really thrilled by Ridley Scott's latest work. But if you're hoping for a clearly comprehensible story, even the great visuals won't save you from a big disappointment. Only conditionally worth seeing

Cinema trailer for the movie "The Counselor (USA/Großbritannien 2013)"
Loading the player ...