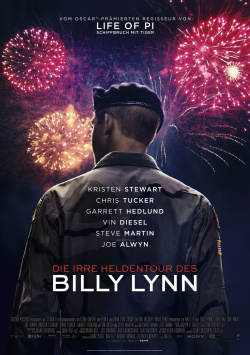 During a tour of duty in the Iraq War, 19-year-old Billy Lynn (Joe Alwyn) and his unit are caught in a bloody battle for which they are now hailed as heroes. Their manager Albert (Chris Tucker) wants to make as much profit as possible from the story for the soldiers and has organized a tour across the U.S., culminating in a spectacular performance during the halftime show of the Super Bowl. Even a movie deal is promised to the men. But the longer they are celebrated, the stronger the painful memories of what really happened in that fight become. And that gruesome reality has so little in common with the show they're putting on.

The Mad Hero Tour of Billy Lynn is an attempt to contrast perfectly staged patriotism and over-stylized hero worship with the harsh reality of war and the trauma it can bring. By showing how the young soldiers are channelled through the machinery of beautiful appearances, director Ang Lee exposes the mendacity behind it. Because as soon as it comes to the truth, to the unpleasant things that are not confronted with in TV productions that almost border on propaganda, people who otherwise faithfully wave the American flag quickly lose interest. By the time the show is over, no one wants to know about the fates of the people behind it.

Grief, doubt, guilt, nightmares - all of these have no place in a hero's tour like this, but determine every second of every day in the lives of young soldiers like Billy Lynn. With some biting humor, which gives the whole thing a satirical undertone in places, and some flashbacks to Billy's time in Iraq and to the truth of the mission, which really eats away at the young man, Ang Lee succeeds in creating a gripping drama, which, however, also has to struggle with some small lengths. By showing the whole promotion circus the soldiers have to go through, it feels at times as if the story is treading water.

The good actors largely make up for it, though. Especially Steve Martin, who is cast completely against the grain, but also newcomer Joe Alwyn make The Mad Hero's Tour of Billy Lynn absolutely worth seeing as acting cinema. It may be that the film isn't perfect and that the ending seems a bit thick. But Ang Lee manages perfectly to entertain on the one hand, but also to make you think and question. And for this there is with small touches also a clear: Absolutely worth seeing!

Cinema trailer for the movie "The Mad Hero Tour of Billy Lynn (USA 2016)"
Loading the player ...