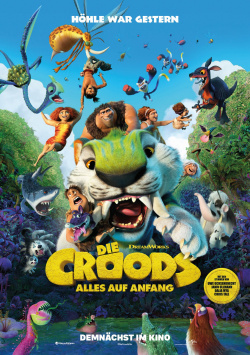 The Croods - Everything from the beginning

The lovable, but also very chaotic stone age family Crood around family head Grug is back. The Croods have to leave their beloved home to find a new, safe home. After an adventurous journey, they seem to have found this in an idyllic paradise hidden behind high walls. Too bad that the Bessermann family already lives here. They've got their home all decked out: In the huge tree house there is every comfort you could wish for. The two families don't really seem to fit together, but they do their best to get along. But when Eep takes the Besserman's daughter Dawn into the dangerous world outside the protective walls, and it is revealed that Dawn's parents want to set her up with Eep's boyfriend Guy, there is mighty trouble in paradise....

It's been eight years since The Croods first hit theaters and made audiences laugh. "The Croods - All Starts"continues the story almost seamlessly despite the long hiatus and also maintains the tone of the original. Still, after just a few minutes, you get the impression that something is missing. No question: The film is once again bursting with bizarre and offbeat ideas. It is colorful, funny and offers much of what made the first part so successful. And also a lot of lovable characters like the sloth of Guy may not be missing in the second attempt.

Dennoch: If the first film still seemed somehow refreshing and original, "The Croods - All at the beginning" seems altogether much more conventional. There are a few really good laughs and visually also pretty ideas. And yet the spark may not quite jump the second time. Sure: Especially with children the film will work well, because the humor in most moments is aimed at this young target group. But whenever the script tries for something more subversive for the adult audience, it just lacks bite.

Yes, I was well entertained, even though I haven't been part of the target audience for a few years now (although: as the dad of a 6-year-old, I kind of belong again). And yes, I think the movie looks great. But still, the sequel just didn't quite convince me. To the first part I had written as a conclusion: "visually impressive, funny, original and endearing - with that, this stone age family was able to convince with their first appearance in such a way that one wishes for much more of it at the end." Even if I can take parts of it also as a conclusion for "The Croods - Everything at the Beginning", my desire to see more of it is then rather limited in this case. Nevertheless: For children and for all those who liked part 1 mainly because of the sloth and the delightfully quirky granny, even the weaker sequel is still worth seeing without a doubt!

A quick note about the dubbing: Uwe Ochsenknecht does a good job as Grug, but he can't match the wonderfully wacky voice performance of Nicholas Cage. Since in the original, besides Cage, stars like Ryan Reynolds and Emma Stone lend their voices to the characters, you should watch the film, if at all possible, in the original English version!

Cinema trailer for the movie "The Croods - Everything from the beginning (USA 2020)"
Loading the player ...