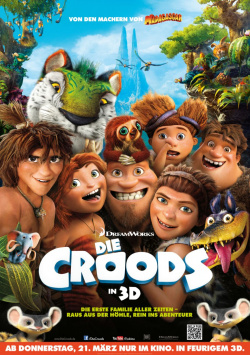 Recently in the Stone Age: Cave teenager Eep Crood (voiced by Janin Reinhardt) really doesn't have it easy. She loves the wide open spaces and the sunlight. But her family prefers to hole up in a tight, dark cave all the time. For good reason, according to Papa Grug (Uwe Ochsenknecht). Because outside the protective stone walls there is only danger and death. Mother Ugga, Eep's brother Thunk, baby Sandy and grandmother Gran don't even think of questioning Grug's horror scenarios. But Eep is sure: there is a better life out there somewhere, they just have to dare to look for it. When she sneaks out of the cave one night, this conviction is indeed confirmed. For the girl meets young Guy (Kostja Ullmann) in the dark of night, who not only carries with him a small sun he calls fire. He also tells Eep of an impending catastrophe that will make it necessary to seek safety on a distant mountain. Grug, of course, wants no part of this. But when the first big earth tremors occur and the Croods' cave is buried, the family realizes: they can't stay here. In search of a new place to stay, the Croods must now move through a world that is completely foreign to them, with countless new dangers. Especially for Grug a real nightmare, because in addition to all sorts of voracious animals and plants, there is also only this nine times smart Guy.

The trailer for The Croods and also the first five minutes of the film do not really expect much good. The whole thing seems like a typical contemporary animated film. Fast cuts, lots of screaming, stale 3D rollercoaster effects and borrowings from successful works like Ice Age. But the surprise soon follows: what Chris Sanders (Lilo & Stitch, Dragon Taming Made Easy) and Kirk De Micco have conjured up on the screen here based on a story imagined by Monty Python John Cleese is really great. True, the characters take a little getting used to and the humor is a little too over-the-top at some moments. But these small weak points are easily made up for by the countless original ideas that have been assembled here.

This starts with the visuals of the story, which are truly breathtaking at some moments. At times, the landscapes seem almost photorealistic, while at other moments you're treated to a fascinating blend of the worlds of Avatar and Ice Age. The makers have really let their imagination run wild here and have thus created a world and creatures living in it, which always leave you as a viewer in amazement or make you laugh heartily. Stumbling mice, punch monkeys, piranha parakeets, mouse elephants or a croc woof that can roll so beautifully (one of the funniest scenes in the film) and of course Guy's animal companion Klammer, who is slightly prone to histrionics, all help to bring the world of the Croods to life and make it a very special kind of fun for the audience.

But other ideas, such as the prehistoric version of Polaroid pictures, provide genuinely funny moments time and time again. Towards the end, however, the obligatory family-is-so-wonderful message again threatens to bury the humor served with refreshing bite under a thick layer of icing. But again, the two directors manage to turn the tide at the crucial moment. True, the whole thing gets a bit sentimental, but to an extent that doesn't harm the charm and the high entertainment value in the slightest. On the contrary, although this part of the story has turned out to be arguably conventional, the lovable characters have grown on you by now to such an extent that the more sentimental moments don't feel cheesy, but downright touching.

The Croods, then, is a real surprise overall: visually stunning, funny, original, and endearing - making this Stone Age family so convincing right from its first outing that by the end (which, thankfully, is devoid of the we-let-our-characters-dance-to-a-cute-pop-song-because-it's-so-funny sequence so popular for animated films), you're left wanting a lot more. A fun, but also fascinatingly beautiful trip to a land before our time that not only little animation fans shouldn't miss. Absolutely worth seeing