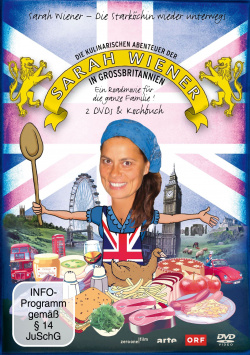 Content: Until now, star chef Sarah Wiener has successfully avoided visiting Great Britain on her culinary journey through Europe. Because where she has encountered in Italy, France and along the Alps on all sorts of delicacies, which are not only considered by gourmets as a delicacy, let her British specialties such as Fish`n`Chips or Black Pudding so far not necessarily the water in the mouth together. But now the chef has got back into her red Beetle and has embarked on a journey that has taken her to England, Wales, Scotland and Northern Ireland and has proved to be a real culinary adventure more than once.

The challenge: on ten stops Sarah Wiener has to master ten traditional dishes of the country's cuisine, only then she receives a surprise in London from her colleague, the British celebrity chef Gary Rhodes. To complete her tasks, Wiener not only has to take care of the preparation, which will then be judged by a critical jury. She also has to take care of sourcing the ingredients, which is easier said than done. Because simply going to the nearest supermarket doesn't count. Sarah Wiener has to go where the ingredients are grown, produced or caught/fished and hunted. So the viewer can accompany her on a grouse shoot in Yorkshire, can watch her diving for scallops on the Isle of Man, also takes part in the apple harvest there, witnesses Wiener shooting her first stag in Northern Ireland or going fishing for fish`n`chips in North Yorkshire.

The documentary also provides an insight into the making of black pudding, whisky or sea salt and shows what a great challenge it is to find not only the ingredients but also the suitable location for a typical British picnic in Dorset. But it is precisely these challenges through which the viewer learns not only something about the culinary aspects of Great Britain, but also a lot about the country and its people. Even if now not exactly each of the recipes, which one can read again in detail in the detailed booklet, really makes you want to cook immediately, because some of the dishes are very special, the ten episodes of this season prove to be extremely tasty overall.

High information content, even higher entertainment value, very likeable moments and images that make you want to immediately pack your bags and travel to the UK (despite such statements as it being a really nice day in July with temperatures around 17 degrees), all this makes The Culinary Adventures of Sarah Wiener in the UK a must watch for all lovers of travel and cooking documentaries. The only question that arises at the end is why Sarah Wiener records her experiences with a Polaroid camera, the pictures of which not only rob the landscape of any beauty, but also make the photographed food look extremely unappetizing (grey-green eel in aspic, for example, looks really unpalatable). Worth seeing!

Picture + Sound: As is actually usual for docu-series, the image of the DVD has a good overall sharpness, which varies, however, depending on where and under what (weather) conditions the shots were taken. So here and there raindrops on the lens or heavy fog provide some blurring. Otherwise, the sometimes really beautiful landscape is captured very well, also thanks to the good colouring. The sound is only in stereo, which is perfectly adequate here. Because except for the dialogues, the off-commentary and the music there is hardly anything, whereby the surround channels could be challenged. Good!

Extras: As a bonus, there is a brief look behind the scenes on the first DVD, as well as an additional scene showing Sarah Wiener harvesting honey in Scotland. Then on the second disc there are also two bonus scenes showing a visit to the shepherd in Wales and the special features of the lemon spread in southern England. Plus, of course, there's the comprehensive, richly illustrated booklet, which not only presents all the recipes in nice detail, but also provides information about the places Sarah Wiener visits in each episode. Good!

Conclusion: The Culinary Adventures of Sarah Wiener in Britain is an entertaining docu-series that not only explores Britain in culinary terms, but also introduces the landscape, people and traditions. Even though each episode focuses on a recipe typical of the country, the ten-part series works even if you are less interested in English cuisine and more interested in the country itself. In addition to all the episodes in good technical condition, the double DVD also has a comprehensive booklet with all the recipes and information about the various places visited, as well as some nice additional moments to offer as a bonus. Definitely recommended not only for Sarah Wiener fans and viewers interested in English cuisine!