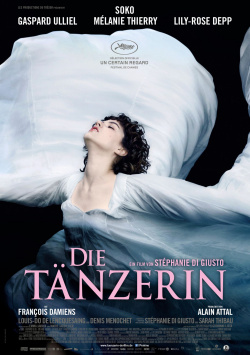 After the murder of her father, Lo&iuml;e Fuller (Soko) is drawn from the American West in the late 19th century. Century from the American West to New York, where she wants to become an actress against the wishes of her strictly teetotal mother. By chance, she creates a dance on stage that will one day make her a big star of the Belle Epoque in Europe. The road ahead is paved with destructive perfectionism, hurt and rejection. But with iron will and the support of aristocrat Louis Dorsay (Gaspard Ulliel) and gentle Gabrielle (M&eacute;lanie Thierry), Lo&iuml;e makes it to Paris. Close to the destination of her dreams, however, the dancer realizes that not only has her body pushed her to the limit, but so has her mind.

With The Dancer, director St&eacute;phanie di Giusto aims to create a cinematic memorial to dance legend Lo&iuml;e Fuller (1862 - 1928), who has been all but forgotten. Her directorial debut is a portrait of a confident fighter who defied all odds to achieve her dream. With her serpentine dance, she broke artistic boundaries in her time and enchanted audiences in a truly magical way. Her performance was a revolution whose influence is still felt today. And yet there are few who remember this dancer. And that's exactly what di Giusto aims to change with her film.

In French pop musician and actress Soko, the director has found a very fitting leading lady, accompanied by a convincing ensemble. Gaspard Ulliel and M&eacute;lanie Thierry in particular deliver very strong performances as Fuller's companions. But while the story is very interesting and the actors compelling, that unfortunately does little to change the fact that the film itself has become a very conventional biopic. Unlike the woman she portrays, di Giusto doesn't dare to break or even vary the artistic boundaries of the genre in which she operates. Strictly adhering to the pattern of standard film biographies, her debut has ended up being absolutely interchangeable, despite an inherently individual story.

A few fascinating dance sequences, the great sets and costumes, as well as the actors playing against all clichés are at least enough to provide The Dancer with enough show and entertainment value, so that on balance the film is worth seeing for such viewers who are interested in the story, despite the somewhat uninspired staging. Not a major revolution, but still a rousing portrait of a genuinely exciting woman. Worth seeing

Cinema trailer for the movie "The Dancer (Frankreich 2016)"
Loading the player ...