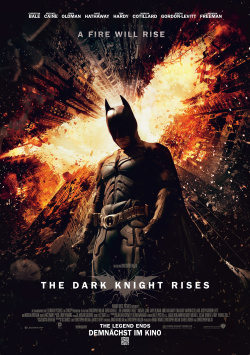 When Christopher Nolan brought his version of Batman to theaters in 2005, this rather dark and serious approach was a refreshing breeze in the genre of comic book adaptations. Especially after Joel Schumache's overly colorful and not particularly popular Batman films with fans, Batman Begins was quite a big step in the right direction. But it was 2008's sequel The Dark Knight that was a downright revolution in many ways. Not only did the film break with the conventions of typical sequels, but its success with audiences and critics was absolutely unusual for a superhero film, not to mention the numerous awards (including 2 Oscars). Now Nolan concludes his trilogy with The Dark Knight Rises. Expectations for his third and final Batman film are naturally extremely high, as he set the bar almost unnaturally high not only with The Dark Knight, but also with his last film Inception. But Christopher Nolan wouldn't be Christopher Nolan if he didn't save a few surprises for his grand finale that easily defy those high expectations.

And that's exactly why, with The Dark Knight Rises, it's of enormous benefit to watch the film without knowing too much about the plot in advance. It's much better to re-watch Batman Begins in advance, as it provides an important arc to the first chapter of the saga. Otherwise, it's perfectly adequate to just know the story's starting point: Eight years have passed since the events of The Dark Knight. Bruce Wayne (Christian Bale) has completely retreated and finally shed his identity as Batman after the Dark Knight took the blame for Harvey Dent's death. Only Commissioner Gordon (Gary Oldman) knows the truth, but he remains silent, knowing how important Dent's estate is to Gotham City. After all, it was only because of Batman's lie that Dent's final law was enacted, significantly lowering the crime rate in the city. Only on the surface, though. For beneath the streets of Gotham, the masked Bane (Tom Hardy) and his henchmen are preparing to bring crime back to Gotham with a particularly horrific bang. It's just as well that feline thief Selina Kyle (Anne Hathaway) has lured Bruce off the reservation - because now nothing stands in the way of Batman's return...

This is admittedly a very simplistic summary of the first third of the film. To reveal more would not be conducive to the very special entertainment experience this film offers. Sure, The Dark Knight Rises isn't a perfect film (if that's even possible), but there are moments where it comes damn close. However, the expectations of some fans have already been raised so high by the prequel and the good marketing campaign that they can't really be met. Moreover, some might be bothered by the fact that the movie seems a bit overloaded. After all, the plot doesn't just span several months. Also, several storylines are pursued, which are admittedly linked at the end to a satisfactory whole.

More than in the two predecessors, Bruce Wayne is here only one of several important characters. Nolan has given a pleasing amount of space not only to Commissioner Gordon, but also to the new character introduced here, John Blake (Joseph Gordon-Levitt). Only Marion Cotillard as Miranda Tate and Selina Kyle aka Catwoman are somewhat overshadowed by the strong male characters, which is a shame in that Anne Hathaway delivers a truly great performance. Her Catwoman is not only sly and sexy, but much more profound, which could have been brought out just a little bit better if she had been more integrated into the story.

This brings us to the big villain of the film: Bane, portrayed by the unrecognizable Tom Hardy (Inception). It's hard to avoid comparing the masked strongman to the awesome Joker from The Dark Knight. However, this should be refrained from. Because not only is it probably impossible to top Heath Ledger's Oscar-winning performance in the eyes of most fans anyway. Bane is also a completely different kind of adversary for Batman, one that doesn't compare to the Joker both physically and psychologically. From this, Bane is a successful antagonist for the Dark Knight, who can convince not only with muscle mass, but also an ingeniously devised plan.

In its implementation, it is particularly clear that the mix of realism and comic book, which set the tone for the second part, has been toned down for the finale in favor of more comic book-like fantasy action. While there is once again a clear reference to reality, which comes into play nicely in Bane's storming of Gotham's stock exchange, overall Nolan relies less on logic and realism in the conclusion of his trilogy than he did in The Dark Knight. As such, some aspects of the story and most especially the finale should not be questioned too much, but simply enjoyed. Because even if Nolan's staging makes you forget it here and there, The Dark Knight Rises is still pure comic book entertainment cinema. And even if this is served with a lot of level and gratifyingly profound, action, effects and visual showpieces are again the main focus.

And here, too, the film can fully convince. The action sequences are first-class staged (a duel between Batman and Bane, in which Nolan completely dispenses with background music, leaves a special impression) and the visual effects are simply great. Accompanied by a soundtrack for which Hans Zimmer has once again pulled out all the stops, and spiced with a few, but very successful humorous interludes, The Dark Knight Rises closes the circle to Batman Begins in an exciting, entertaining and visually impressive way. There would be a lot more to say, but that would mean giving away too much about the story, and I want to refrain from doing that for reasons already mentioned. Surely, this brilliant finale will not satisfy all fans. Nolan offers enough potential fodder to en naggers, but it tastes all the better if you just leave your cynicism at home and simply enjoy three hours of entertainment cinema of the best kind.

The Dark Knight Rises is gritty, long (but at least to my mind, not too long), cleverly constructed and nicely resolved. Despite a few minor hangs and various logic holes, it's a very big movie that simply belongs on the big screen. And that's why in the end there is only one conclusion: absolutely worth seeing!!

Cinema trailer for the movie "The Dark Knight Rises (USA 2012)"
Loading the player ...