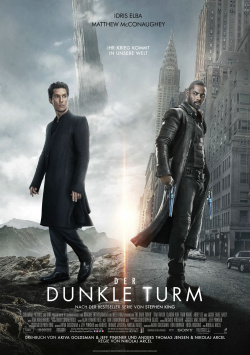 Time and again, twelve-year-old Jake Chambers (Tom Taylor) is haunted by strange visions. In them, he sees a dark tower and a mysterious gunslinger (Idris Elba) fighting the Man in Black (Matthew McConaughey) and his henchmen. Those around him think Jake is a dreamer who uses these stories to deal with the death of his father. His mother and his stepfather even want to have Jake committed to a clinic. But the boy can escape and gets through a portal in an old house from his visions in a strange world. Here in Mid-World he meets Roland, the gunslinger, whose only goal is to kill Walter, the man in black, and thus save the Dark Tower and avenge his family, who were wiped out by Walter. Jake seems to be the key to everything - but the boy is also invaluable to Walter. The battle for the Dark Tower, and with it the many worlds it protects, has begun.

To say The Dark Tower is a faithful adaptation of the popular fantasy series penned by Stephen King would be about like saying The Godfather is a film version of the New York phone book. Yes, there are names and places you'll recognize from the book, but otherwise the film adaptation so long awaited by fans goes its own way. Nikolaj Arcel and his co-writers were faced with a very difficult task: on the one hand, they had to create a story and worlds that, if successful, could still be expanded into a great epic. On the other hand, learning from the failure of several adaptations of other novel series that were started and never finished, they wanted to create a film that could stand on its own.

They neither completely succeeded nor completely failed in both. Clearly, those who know and love the books will be disappointed by this film for long stretches. The cast is good, with Idris Elba and Tom Taylor in particular being convincing. And there are some moments where the spirit of the books can definitely be felt. But there are some differences from the book, especially concerning the man in black, that really make fans' hackles stand up. In addition, the film suggests that this is primarily Jake's story. Of course, that's not the case in the books. Jake is an important companion to Roland. He is an important piece of the puzzle for the story - but it is, and remains, Roland's journey that you follow as a reader.

Among those who have devoured all the volumes in the series and for whom Stephen King's magnum opus has triggered violent head-spinning, there will probably be few who will be excited by this film. But what about those viewers who haven't read any of the books? Here I have to be honest even as a fan of the books: They're in for a solid fantasy adventure. Sure, even then the movie still has its weaknesses, which are partly due to the short running time. But you have to give it credit for one thing: It's never really boring. Idris Elba is, as always, a cool sock, even when he has to deliver extremely thin dialogue. The action is neatly realized and the numerous allusions to various King novels then always make fans smile with satisfaction.

Naturally, it's a shame that The Dark Tower didn't become the movie it could have been. It's sadly not the gritty kickoff to an epic full of fantasy, horror, adventure, and entanglements to other King novels and works of pop culture like Star Wars or Harry Potter that it is in the books. But it's an entertaining fantasy flick that, detached from all expectations, manages to entertain well. Therefore, there is a double assessment: as a novel adaptation a flop, as a standalone work well worth seeing!