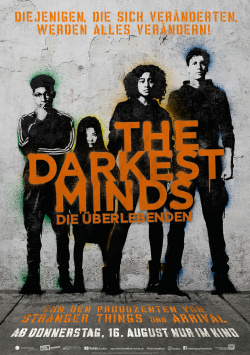 The Darkest Minds - The Survivors

A large percentage of children in the United States have fallen victim to a mysterious plague. Those who have survived have extraordinary powers. Some of them are merely particularly intelligent. But there are a few children who have powers beyond imagination. A reason for the adults to send the children to so-called resocialization camps, where they are divided into colors according to their abilities. Only those classified red or orange are killed immediately. Ten-year-old Ruby is also considered orange - and therefore particularly dangerous. But her abilities allow her to still be classified as green and thus harmless. For six years, Ruby (Amandla Stenberg), now a teenager, lives in the camp before she is exposed. But before she is eliminated, she is saved by a mysterious woman (Mandy Moore). But the girl can't trust her either, so she and a small group of other teenagers make their escape. Their destination is called East River, a place where other children supposedly live in safety. But the way there is dangerous, especially since a particularly ruthless bounty hunter (Gwendoline Christie) has set out to hunt Ruby.

The Darkest Minds - The Survivors is an attempt to create a new Panem. Once again, a popular Young Adult trilogy served as the template. The first volume of Alexandra Bracken's bestselling series provided the template for the live-action directorial debut of Jennifer Yuh Nelson, who had previously directed animated films such as Kung Fu Panda 2. However, she seems to have been a bit overwhelmed with this schema-F dystopia. The film seems to be cobbled together from set pieces of other works. Whether it's X-Men or Divergent - The Destiny - almost everything you get here has been told before.

That wouldn't be so bad, if a gripping suspense would be built up here. But this, like the rest of the movie, remains consistently in mediocrity. Neither the characters nor the story are really fleshed out, leaving a couple of template-like characters to struggle through a plot framework dominated by clichés. The only thing this book adaptation has going for it is its strong lead actress. Amandla Stenberg, who made her first major appearance as Rue in The Tribute to Panem and was already the film's best aspect in the teen romance You Beside Me, is able to convincingly play against the weak script with a mixture of innocence and strength. Her co-stars, unfortunately, only succeed to a limited extent.

The Darkest Minds - The Survivors isn't really bad, but rather completely inconsequential. As a pilot to a television series the whole thing would be okay, but as a great cinematic adventure the film falls very weak compared to other representatives of its guild. Despite the good leading actress and some really good moments, there is even for the target audience only a rather restrained: worth seeing!

Cinema trailer for the movie "The Darkest Minds - The Survivors (USA 2018)"
Loading the player ...