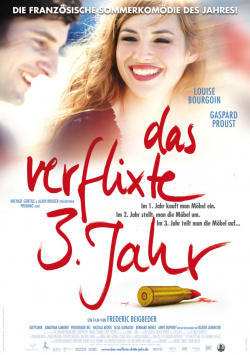 Cinema in particular always likes to tell stories of eternal love. And most people dream of meeting the person with whom they can happily spend the rest of their lives. But is there really such a thing as eternal love in real life? Literary critic Marc Marronnier (Gaspard Proust) has a very different thesis: even the greatest love has an expiration date, which usually occurs after three years. When he met and fell in love with Anne (Elisa Sednaoui), Marc also still believed in the great love. Now, however, in the midst of his divorce, he is so convinced of his thesis around the darned 3rd year that he writes it down in the form of a pamphlet. But just as he is about to make a career out of his book, published under a pseudonym, he meets the beguiling Alice (Louise Bourgoin), who makes him reconsider his beliefs...

Frédéric Beigbeder, whose acclaimed novel 39.90 was congenially adapted into a film by Jan Kounen in 2007, has sat down in the director's chair himself for the first time to adapt his book Love Lasts Three Years. The result is The Darned 3rd Year, a romantic comedy, which is surprising considering Beigbeder's novels and the sometimes very cynical, bitterly evil undertones. On closer inspection, however, his directorial debut also reveals a rather satirical character, culminating in a number of punchlines that then again make Beigbeder's signature clearly felt.

With stand-up comedian Gaspard Proust and Louise Bourgoin as a femme fatale, the comedy is then also very well cast and also the role that Beigbeder has written the rapper Joeystarr (Poliezei) on the body, is a real asset to the film. Overall though, you can tell that Darned 3rd Year is a directorial debut. That's because, especially when it comes to comedic timing, Beigbeder quite rarely hits the mark directly. While some moments are extremely amusing and have a lot of humorous bite, other aspects come across as strained and completely unfunny. This is true, for example, of the role played by Frédérique Bel (The Art of Loving). As Kathy, the wife of Marc's friend Pierre, she only speaks in English because it sounds so sexy in the porn movies she loves to watch with her husband. As an idea, this may sound quite funny. But in the movie itself it just doesn't work because the scenes in which Kathy appears lack the appropriate timing. In addition, there is always the feeling that the director has slowed himself down in favour of a more commercial production and has not gone as far as one is used to in his books.

No question, The Darned 3rd Year is an entertaining and very nice comedy, in which lovers of French romances of the more biting kind can definitely enjoy. But just because here is tried to leave the usual paths of the genre now and then and to tell the abysmal romantic story at heart with a little more wicked humor and cynicism, a little more biting staging and better comedic timing would have been desirable. Therefore: only with deductions worth seeing!

Cinema trailer for the movie "The darn 3rd year (Frankreich 2011)"
Loading the player ...