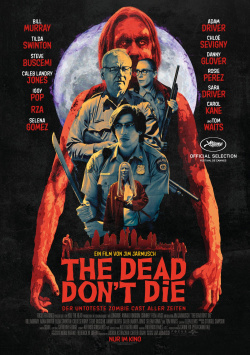 Well, we humans just couldn`t leave it alone. And now we have the salad: Due to unrestrained fracking, the earth's axis is shifting - with unimagined consequences, causing bloody chaos in the idyllic small town of Centerville, of all places. The sheriff Cliff Robertson (Bill Murray) does not want to believe what is going on in his small town, but for his young colleague Ronald Peterson (Adam Driver), the matter is clear. The dead have risen from their graves and are making the town unsafe as zombies. The only thing that can stop them is to make them a head shorter. And so the policemen must go together with their colleague Mindy (Chlo&euml; Sevigny) on zombie hunt, whereby the mysterious undertaker Zelda Winston (Tilda Swinton) with her samurai sword is helpful to them. But can the four of them get on top of the plague before the zombies have spread to Centerville?

With The Dead Don`t Die, Jim Jarmusch, the master of laconic humor, now delivers his contribution to the zombie genre. The result should have been a masterpiece. After all, Jarmusch has not only brought some great actors in front of the camera. His very special humor, coupled with a delightful play with the clichés of the zombie genre, gives the subject, which has been badly overused in recent years, a long overdue fresh cell cure. The fact that the production occasionally breaks the fourth wall, that Jarmusch takes the piss out of himself and that Tilda Swinton is given an exit that seems like an homage to the finale of the Rocky Horror Picture Show, adds to the fact that the comedy should have the makings of a cult film.

Actually - but despite all the coherent ingredients, it lacks that special something. This impression may have been created by the fact that Jarmusch lacks any form of subtlety in some scenes. This is especially true of the character played by Steve Buscemi, who is meant to be a too-obvious sideswipe at the typical Trump voter. However, this is not particularly clever, but simply flatly implemented - apart from a small scene between Buscemi and Danny Glover.

But Buscemi's character is symptomatic of the whole film: the ideas are good, at times even ingenious, only the implementation is either too obvious or even seems a bit clumsy. And that's something you're just not used to from Jarmusch. But even if The Dead Don`t Die didn`t turn out to be the movie it should have been, given the great premise, there are still a few aspects that make it absolutely worth seeing, especially for fans of slightly weirder horror fare, as well as for Jarmusch fans. So in the end you are left with a somewhat ambivalent conclusion: On the one hand somehow disappointing, but on the other hand great in a very special way. All in all this results in a clear: Worth seeing!

Cinema trailer for the movie "The Dead Don`t Die (USA/Schweden 2019)"
Loading the player ...