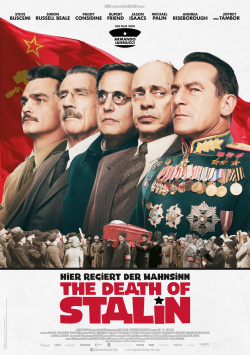 The Death of Stalin

02.03.1953: Excitement in Moscow. After a stroke, Josef Stalin is dying. Even before Stalin has taken his last breath, a bitter fight for his successor begins. The members of the Politburo spin intrigues and ram the knives into each other's backs in order to end up in the best possible position in the successor government. Of course, the appearance must always be preserved and a pompous funeral must be planned. Days full of madness follow, in which the whole depravity of the regime with all its vicious facets reveals itself…

Director Armando Iannuci knows his way around politics very well, being just as responsible for the award-winning BBC series "The Thick of it" as for the first four seasons of the great HBO series "Veep". And also his feature film debut "In the Loop", for whose screenplay he received an Oscar nomination, dealt with the machinations of politics in a sharp-tongued way. Therefore he seemed to be the perfect candidate for the adaptation of the celebrated graphic novel "The Death of Stalin". With a top-class cast that includes Steve Buscemi or "Transparent" star Jeffrey Tambor as well as "Monty Python" legend Michael Palin, nothing should go wrong.

However, despite all this excellent potential, the movie just doesn't want to work. Certainly, there are some very good moments when the bitterly satirical tone works well. There are some wonderful dialogues, which mix every now and then with successful slapstick. But most of the time the events are dominated by confusingly babbled dialogues and a humour that gets into the way more than once. The discussion about how far satire can go has been conducted countless times. The consensus is usually: If it is well done and also has a certain meaning, satire can go quite far. But if it is not carried out consistently, as is the case here, and then the rape or murder of innocent people is made fun of, the fun stops.

Now it can be argued that such topics are not really made fun of. But they are just integrated into the humorous context and more than once that really pisses them off. Maybe that wouldn't be so bad if the rest of the movie had some really deep and clever jokes to offer. But even that is unfortunately far too seldom the case. "The Death of Stalin" is a complete mess in which the different set pieces simply don't want to fit together. In view of the really great talent of those involved in front of and behind the camera, this is not only a pity, but also a real shame. What could have become a classic of historical-political satire has unfortunately only become a film that should quickly fall into oblivion. Only very conditionally worth seeing!

Cinema trailer for the movie "The Death of Stalin (Frankreich/Großbritannien 2017)"
Loading the player ...