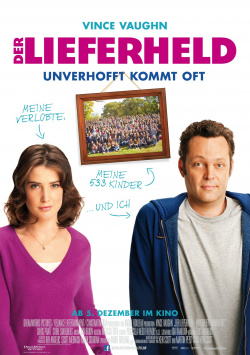 David Wozniak (Vince Vaughn) loves his simple life where he doesn't have to take on any real responsibilities. Because growing up is something David just can't get comfortable with. He's as dispassionate about his job as a delivery man for his father's butcher shop as he is about trying to earn a few bucks on the side with a small marijuana plantation in his living room. No wonder his girlfriend Emma (Cobie Smulders) is less than pleased when she learns she's expecting a child from the irresponsibility incarnate. But an unexpected opportunity to practice being a father opens up for David when he learns that his regular sperm donations, which earned him plenty of money as a young man, have borne fruit. Because due to an error, only his donations were used by the clinic during that time period. And so David is suddenly the father of 533 children. Although David's identity has been protected until now, 142 of the children have banded together to use a class action lawsuit to learn the identity of their genetic donor. Against his lawyer's advice, David is quite interested in learning who the young people carrying his genes are. But when he begins to take a peek into his children's lives, his own is finally derailed.

With The Delivery Man, Canadian director Ken Scott has directed a 1:1 US remake of his surprise hit Starbuck. This is very convenient for us film critics, because here - as was probably done when the script was written - you can just copy + paste at least the synopsis. After all, the story is exactly the same. Also, the American David Wozniak drives the exact same truck as his Canadian self. And even facial expressions and gestures were taken directly from the original in many a scene. Does the whole thing work? As far as the story goes, the answer is a resounding yes! Even if the story, which is inspired by true backgrounds, seems a bit overdone at times, it is overall just nice to look at and is full of funny and also touching moments.

However, overall Ken Scott has lost a bit of charm and of course originality in the adaptation of his material. Moreover, despite his obvious efforts to be a little less the typical Vince Vaughn for once here, Vince Vaughn comes across as far less natural and endearing than his French-Canadian counterpart Patrick Huard. Better cast than in the original, however, is the role of David's best friend and lawyer. Chris Pratt (Everwood, Parks & Recreation) is simply wonderful as the overworked father and less-than-talented lawyer, and undoubtedly provides the film's best laughs. How I Met Your Mother star Cobie Smulders, on the other hand, remains somewhat pale, though this is not due to her performance, but rather to the character being drawn a bit too superficially.

To say The Delivery Man is much worse than Starbuck would be bullshit, as the two versions of the story are simply too similar to really show any significant differences in quality. What is very clear, however, is that the US version itself is completely unnecessary especially for markets where the original was in theaters or released on DVD. So if you're Starbuck, you really don't need to watch Delivery Man. But if you don't know the original, like nice little feel-good comedies or are just a big Vince Vaughn fan, you'll get 100 entertaining and sometimes really funny minutes here. And for that you get a: Worth seeing!