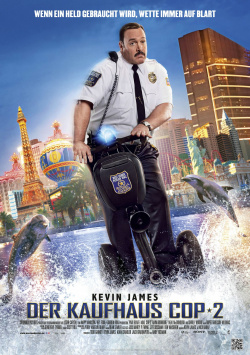 Paul Blart (Kevin James) is back on the job: after being hailed as a hero for a short time, life has not been kind to the department store cop. The love of his life has broken up with him after only a few days of marriage and his beloved mother has been run over by a milk delivery man. Only his daughter Maya (Raini Rodriguez) gives him support during this frustrating time. But then there is finally a small moment of happiness when Paul is invited to the big Security Guard Expo in Las Vegas. He is sure that his rescue of the West Orange Pavilion Mall six years ago will be honored there. But things turn out very differently than expected. Because of all things, a major art theft is about to go down at the hotel where the Expo is being held. And of course a department store cop like Paul Blart can't let that happen...

The films of Kevin James may not be the biggest critics' favorites. Box office hits they usually are, though. As department store cop Paul Blart, he was able to rake in nearly $200 million in worldwide box office six years ago despite lousy reviews. With a very manageable budget of 26 million dollars, that's a pretty good profit, which is why a sequel was inevitable. And so Paul Blart can now get back on his Segway and slide from one disaster into the next. On the surface, The Department Store Cop 2 remains true to the concept of the first part in every respect. There is once again a spectacular crime that Blart has to prevent with more luck than sense. And there's also plenty of slapstick again, which fans of Kevin James can surely laugh heartily about again. Sure, some of the good gags are actually only slightly varied taken from the first part, such as the amusing consequences of acute sugar shortage in the dorky security guard. But despite some recognition value, they still work quite well for the target audience.

The real problem with the film is the way the character of Paul Blart has changed over the years. In part 1, he was still the lovable loser who you would have given all the luck in the world to. After only a few minutes, Paul Blart clearly had the audience's sympathies on his side. In the second part he seems completely out of touch with reality, arrogant and especially in regards to his daughter like a completely insensitive idiot. Even if it is clear that this is only a façade, it is especially difficult in the first half of the film to like this Paul Blart as much as the one from the first part.

This then also has the consequence that many of the gags only come along sluggishly. The false teeth and funny hairstyles given to some of the supporting cast don't help much either. Until Paul Blart is allowed to take on the bad guys, the movie drags on and on and doesn't make the audience laugh much. The last third of the movie can compensate for that a little bit. But this doesn't make the movie really good. Surely, The Department Store Cop 2 is not made for the feuilleton, but should first and foremost lure fans of the first part into the cinemas and offer them 90 entertaining minutes. And on balance, the brute comedy manages to do that quite well. If you like the humor of the Kevin James or Adam Sandler movies, you will definitely get some good laughs for your money. But if you could only smile tiredly at the first Paul Blart, you will definitely not become a fan of the department store cop in this sequel. Therefore: Only for fans with cutbacks definitely worth seeing!

Cinema trailer for the movie "The Department Store Cop 2 (USA 2014)"
Loading the player ...