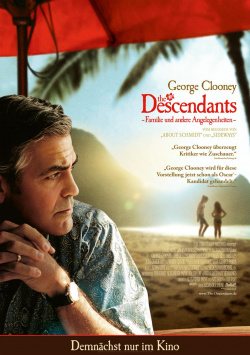 The Descendants - Family and Other Matters

After the huge success of Sideways in 2004, director Alexander Payne has been very quiet in recent years. With the exception of a segment in the episodic film Paris Je t`aime and an episode of the series he produced, Hung, there has been no new directorial work from Payne. But now the director, acclaimed for films like About Schmidt and Election, makes an impressive return with the film adaptation of the novel The Descendants. Once again, Payne proves his flair for soulful stories, telling them with quirky comedy and completely cheesy emotion.

While Matt King (George Clooney) lives in Hawaii with his wife and two daughters, Scottie (Amara Miller) and Alexandra (Shailene Woodley), his life isn't really paradise. As Matt throws himself more and more into his work, he becomes estranged not only from 17-year-old Alexandra, but also increasingly from his wife. When she falls into a coma after a speed-boating accident and has only a few days to live, Matt must try to prepare his daughters to say goodbye to their mother. At the same time, he must make a decision about whether to sell his family's large estate to a wealthy investor. That really leaves little room to deal with any more problems. But then Matt learns that his wife has been having an affair. Suddenly his whole life is thrown off kilter, and as he and his daughters try to track down his wife's lover, he learns to appreciate the meaning of family in a whole new way...

As in Alexander Payne's earlier films, ordinary people are at the heart of the action in The Descendants. Matt King is not an over-stylized hero, not a caricature, but a very ordinary man desperately trying to make several important decisions at once to please his comatose wife, daughters and entire extended family alike. The story itself is rather dramatic, at times very sad stuff. But Payne does a first-rate job of serving it up with such a light hand that the audience is thoroughly entertained in the process. There are many moments of wonderfully whimsical comedy that never seem silly or over-the-top, making for extremely strong laughs.

George Clooney delivers a real tour de force in this tragicomedy. On the one hand he acts very humorous, on the other hand he is able to fully show his acting strength in the quiet and very dramatic moments. And maybe it's just this multi-faceted performance that makes Matt such a believable and endearing character. Now, with such a strong performance, there is often a danger that the supporting cast will be upstaged by it. But that is not the case here. Shailene Woodley, in particular, plays on a par with Clooney as 17-year-old daughter Alexandra, making her quite the discovery of this film.

Another important performer in the film is the Hawaii location. Alexander Payne has managed to not present the typical paradise image of the island nation, but instead show the many different facets of Hawaii and life there. Picturesque beaches and wonderful landscapes are juxtaposed with simple residential areas and grey city quarters. This creates a very special atmosphere in which the wonderful script, which Payne wrote together with Nat Faxon, can unfold perfectly.

The Descendants is a film about life and death, about family and inner peace. The fact that the whole thing is completely without the usual kitsch, does not hit the audience with the moral club, but is simply beautiful, funny and moving, makes the Golden Globe winner a real must for lovers of more sophisticated Hollywood cinema. Simply great and therefore also: absolutely worth seeing!

Cinema trailer for the movie "The Descendants - Family and Other Matters (USA 2011)"
Loading the player ...