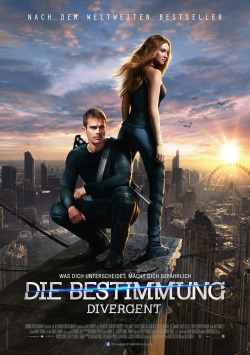 Film adaptations of novel series of the so-called Young Adult target group are currently booming. From Twilight to The Tributes of Panem to Chronicles of the Underworld, there is hardly a Young Adult series that is not being adapted for the cinema. Now, with The Destiny - Divergent, it's also the turn of Veronica Roth's popular novels to lure masses of mainly young girls into the cinemas. And this first film in the planned trilogy could well succeed in doing so, because apart from a few minor lengths, this dark vision of the future is absolutely successful.

The world as we know it no longer exists. The humans that have survived are divided into five different factions based on their virtues: Into the selfless Altruan, the outspoken Candor, the knowledgeable Ken, the peaceful Amite, and the fearless Ferox. This is to ensure that resources are used perfectly and a necessary order is maintained. All youths must undergo the test at a certain age, which assigns them to a virtue. For Tris Prior (Shailene Woodley), the time is also for her destiny. But her test results are inconclusive. She is one of the undetermined few, which makes her a potential threat in the eyes of the government. Therefore, Tris keeps quiet about the results and joins the Ferox. Here, she quickly realizes the danger she is in should her secret be discovered. For Jeanine (Kate Winslet), the leader of the Ken, has called for a fight against the Undetermined. And so Tris must do everything she can to successfully complete her tough Ferox training. She gets help from the mysterious Four (Theo James), who seems to know more about the Undetermined than he lets on.

Destiny - Divergent may be strongly reminiscent of The Tribute of Panem, with its underlying dystopian mood and a young heroine who rebels against the powerful controlling forces. It's quite clear that the same target audience is meant to be addressed here. But even if the story may lack independence and thus the big surprises are missing, the film offers enough positive aspects that keep the entertainment value pleasantly high, at least for the intended target audience. This starts with the visual realization. Especially the introductory tracking shot through an apocalyptic cityscape, accompanied by the rousing music of Dutch DJ and music producer Junkie XL is great implemented and builds a very special atmosphere, from which the rather conventional story can clearly benefit in the further course.

Neben the visual implementation, it is also the staging of director Neil Burger (Without Limit), which helps the film over some dramaturgical hangs. Although there are few real moments of suspense or action sequences, the film has a decent pace that is only unnecessarily slowed down by some scenes that are a bit too drawn out. While there's no question that the story didn't necessarily need over two hours to be told. But Burger's staging is tight enough that there is never any real boredom. On the contrary, even moments whose outcome is actually clearly predictable, he's sometimes executed so well that there's still plenty of suspense to go around. The good cast, led by a convincing Shailene Woodley (The Descendants) and a wonderfully unsympathetic Kate Winslet, also contributes to the very positive overall impression.

Admittedly, the obligatory love story is implemented in two scenes too turgid and the very big dramatic moments in the last act do not necessarily have the emotional depth that was probably intended. Nevertheless, The Destiny - Divergent is a very entertaining futuristic thriller with high show and entertainment value, which you can definitely enjoy even if you're not a girl between 14 and 18. And even though Burger has directed the story in such a way that it works on its own and feels self-contained, we can already look forward to the sequel, which is set to hit theaters in 2015, directed by Germany's Robert Schwentke. Worth Seeing

Cinema trailer for the movie "The Destiny - Divergent (USA 2013)"
Loading the player ...