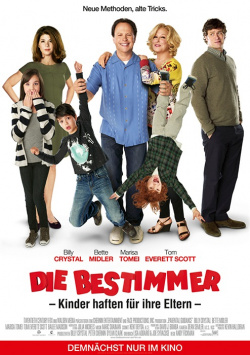 The Determiners - Children are liable for their parents

It's not a good day for passionate sports commentator Artie Decker (Billy Crystal). First he's put on the professional sidelines. And then his wife Diane (Bette Midler) offers to have them both watch their three grandchildren while their daughter Alice (Marisa Tomei) goes on an important business trip with her husband Artie (Tom Everett Scott). Artie just can't relate to the kids and his rather old-fashioned parenting methods are extremely upsetting to Alice. And so it comes as it must: after only a short time, chaos reigns, getting worse by the hour. But Artie and Diane don't give in that easily. After all, they are convinced that they, and not the children, are the ones in charge of this babysitting job. If they're not mistaken.

With The Determiners, director Andy Fickman (Daddy Without a Plan) has staged a classic family comedy that starts out very well, but drops off sharply in quality toward the end, culminating in a completely over-sugared kitsch finale. In the first few minutes, however, you get to enjoy the long overdue comeback of Billy Crystal, who hasn't played a real lead role in over a decade. He and Bette Midler have great chemistry, which is why it's a real joy to watch the couple as their traditional parenting methods clash with Alice and Artie's more anti-authoritarian ideas. With plenty of classic slapstick and amusing wordplay, there really is a lot to laugh at, especially in the first half hour. Sure, most of the gags aren't really new and remain somewhat over-the-top throughout, but well-behaved and absolutely politically correct. But the way in which they are served up, due to the good lead actors and the fast-paced production, seems pleasantly fresh and just works really well.

There it is then only slightly negative notice how one-dimensional the characters are drawn and how poor in surprise the story is kept. If Andy Fickman had managed to keep the pace and the level of the gags on a par, at least The Determiners could have become an entertaining and absolutely recommendable family comedy for young and old. The beginning shows that the prerequisites are there. But instead of charm, witty dialogue and biting gags, the production relies more and more on dripping kitsch and its sledgehammer-hammering, oh-what-is-family-but-beautiful-and-important message. This takes on such proportions by the end that the humor all but disappears and the comedy's entertainment value dwindles to almost nothing. The characters then have only morality-soaked debates, at the end of which the obligatory hugs of sprawling length are not to be missed.

Here, less would definitely have been more. A little kitsch and we-all-love-romance is allowed. But Fickman just overdoes it, and instead of the gag fireworks of the beginning, there's just one never-ending salvo of kitsch at the end. If you like harmless Hollywood family comedies or would like to see Billy Crystal and Bette Midler in the cinema again and can overlook the less successful moments and especially the finale, you will enjoy The Determinators. But if you expect more originality and cleverness or are easily annoyed by loud children, you should give this off-the-shelf production a wide berth. Only conditionally worth seeing!

Cinema trailer for the movie "The Determiners - Children are liable for their parents (USA 2012)"
Loading the player ...