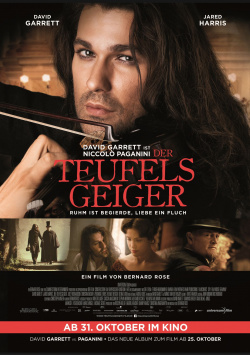 His violin playing was so virtuosic that he was thought to have diabolical powers, and his appearance was so appealing that he had womankind at his feet. Niccol&ograve; Paganini, also known as the Devil's Violinist, was a legend in his own lifetime. And even today, the violinist and composer is still considered one of the greats of his guild. A good reason to set a cinematic monument to him. The director Bernard Rose has now taken on this task, who already dealt with him in Ludwig Van B. - my immortal lover with a musical genius. For Rose it was clear that he didn't want to hire an actor for the role of the devil's violinist who only pretends to be able to play the violin. Instead, he preferred a violinist with great skill and charisma who, if possible, should also have some acting talent.

The choice fell on David Garrett, the rock star among violinists, who seemed virtually predestined for the role. Garrett embodies the virtuoso at the peak of his career. He is celebrated and loved by women all over Europe, and his person has become a veritable myth that fascinates and fills concert halls. Only in London has Paganini not yet performed. In 1830, the British impresario John Watson (Christian McKay) is determined to change that. He risks his entire fortune and reputation to get Paganini to give a guest performance in London. But Paganini's wily manager Urbani (Jared Harris) keeps stalling Watson longer and longer. He lets his protégé collect advances, but that doesn't make the virtuoso think twice about a trip to London. Just as Watson and his family are on the brink of extinction, the tide turns: Paganini and Urbani arrive in London. Despite loud protests from women's rights activists, who see Paganini as the spawn of a sexist, Paganini's guest performance actually seems to become the great success Watson had hoped for. But when the violinist falls in love with Watson's beautiful daughter Charlotte (Andrea Deck) and Urbani sees his influence over Paganini waning through her, the tide turns.

The Devil's Violinist is an ambitious work, there's no question about that. Bernard Rose combines aspects of Paganini's biography with motifs from Faust to create a blend of biopic, romantic drama, and mystical historical film that scores points with a coherent set and Paganini's stirring music. David Garrett is visibly striving to convincingly master his first lead role, but he doesn't really get much opportunity to do so. When he's not playing the violin, his role is primarily confined to suffering with hair hanging in his face from world-weariness or whining about the people who don't understand his talent. Garrett can't display any real complexity simply because of the script, which unfortunately results in his performance only being full of life when he picks up the violin.

Also, the otherwise very reliable Jared Harris doesn't exactly get to be on his best behavior here. His portrayal of the diabolical Urbani is far too theatrical, too contrived to be really convincing. Only Andrea Deck leaves a really positive impression, who delivers a convincing debut, not only vocally. But the actors can't be blamed for anything. The fact that their acting just doesn't work is primarily due to the script and the direction, which seems to be hopelessly overtaxed with the material. It becomes clear time and again where Bernard Rose's ambitions went, with what passion he went to the task here. But the finished film simply lacks soul, emotional tension, and characters that you as a viewer really care about.

This does not make The Devil's Violinist truly bad. There are plenty of scenes that work well on their own, and numerous show-stopping moments that are intensified by the music. But the film simply can't offer more than nice, somewhat inconsequential entertainment. Those who expect a film biography about Paganini based on facts will be just as disappointed as lovers of the great romantic cinema. The Devil's Violinist is neither fish nor fowl - and therefore only partly worth seeing!

Cinema trailer for the movie "The Devil's Violinist (Deutschland/Österreich/Italien 2013)"
Loading the player ...