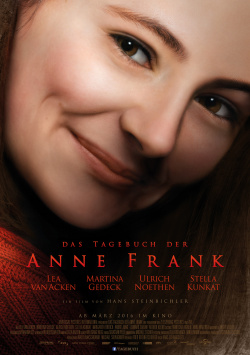 The Diary of Anne Frank

Just a few months after the acclaimed production of the Hessischer Rundfunk now comes another adaptation of The Diary of Anne Frank in our cinemas. The story here should be familiar to most: After emigrating from Frankfurt to the Netherlands, Anne Frank (Lea van Acken) and her family manage to start a new life in Amsterdam. But then the horror catches up with them when the Germans occupy the Netherlands. The Jewish family must now also fear for their lives here. But father Otto Frank (Ulrich Noethen) has taken precautions: he has set up a hiding place in the back of his company headquarters where the family is to find protection from the Nazis. And other Jews also find shelter here in a little more than 50 square meters. In constant fear of being discovered, the eight inhabitants of the back house have to try to master their life together in the smallest space without the outside world noticing anything. For young Anne, it's a particularly difficult situation, which she overcomes by recording her fears, as well as her wishes and dreams, in her diary, which will one day inspire and move people around the world.

Reviewing a film like The Diary of Anne Frank is no easy task. Because of course the story is moving and it may be important to tell it over and over again. And of course it wouldn't occur to anyone in their lifetime to criticize Anne Frank. Nevertheless, even a film that addresses sensitive and important issues and portrays important figures in contemporary history should not simply be given a free pass. Criticism, when appropriate, must be allowed here as well. There is no question: director Hans Steinbichler has done a lot right in his film adaptation of the material. Lea van Acken, for example, is a great talent, as she impressively demonstrated in the oppressive drama Kreuzweg. And the camera and set are also great in that they capture the oppressive atmosphere in the Franks' hideout very well.

As a viewer, you can feel the fear that constantly hangs over those in hiding, but at the same time you can also witness the small moments of exuberance or happiness that can lift this dark veil again and again for brief moments. Steinbichler and his team have done all of this very well, making this adaptation of The Diary of Anne Frank an emotionally intense experience in places. However, there are also aspects that keep the viewer at a distance rather than getting them emotionally involved. This happens especially because the acting of some of the actors sometimes seems a bit too theatrical and thus doesn't seem real but acted. However, these are not the moments when the fourth wall is broken and Anne speaks directly to the audience. These scenes work very well from an artistic standpoint, but they also have an artificial flair and take away some of the film's otherwise very authentic power.

The drama's biggest problem, however, is its ending. There is one moment that is the perfect conclusion to the story. This scene is extremely intense and relates to an earlier moment in the film. But Steinbichler absolutely had to tack on an extremely striking epilogue that serves no purpose other than to needlessly shock. Yet it wouldn't even be necessary. With the aforementioned scene, which would have represented a rounded conclusion, the audience would have been shocked and dismayed enough to leave the cinema. To go back on that emotionally is not only unnecessary, but almost annoying.

The Diary of Anne Frank is not really a necessary remake of the material. But apart from the ending and some too artificial acted scenes, it is a good to very good adaptation, which actually deserves a worth seeing primarily because of the oppressive atmosphere and the convincing performance of Lea van Acken.

Cinema trailer for the movie "The Diary of Anne Frank (Deutschland 2015)"
Loading the player ...