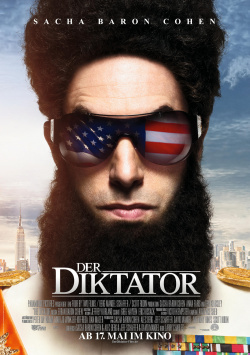 Whether as Ali G., as Borat or as Brüno, no matter which role Sacha Baron Cohen slips into, it may always be assumed that political correctness and good taste are sought here in vain. And with the very loosely based on the novel Zabibah and the King of Saddam Hussein satire The Dictator, the Briton once again lives up to his reputation as the enfant terrible of the contemporary comedy scene.

In the film, Sacha Baron Cohen plays Admiral General Aladeen, the powerful leader of the People's Republic of Wadiya, who is determined to do everything in his power to prevent his beloved country from becoming another victim of the Western world's democratization mania. When he is summoned to New York to justify his nuclear program to the United Nations, Aladeen plans to make it clear to the world once and for all what a great and powerful dictator he is. Too bad, though, that shortly after his arrival, he is kidnapped and robbed of his trademark magnificent beard. While his political opponents have set up a double to announce the democratization of Wadiya at a big speech, Aladeen does everything he can to stop this madness. The fact that he gets the help of a feminist eco-shop owner (Anna Faris), of all people, doesn't dissuade the dictator from his plan - at least for the moment...

Unlike their last two collaborations, Borat and Brüno, Sacha Baron Cohen and director Larry Charles eschew the improvisational, anarchic doc style for The Dictator. Here, they've gone much more clearly scripted, which gives the film a slightly lower extraneous factor than its predecessors held. However, that doesn't mean that things are more well-behaved or politically correct here. On the contrary, almost every word that leaves Aladeen's lips can be seen as racist, misogynistic, sick and inhuman. However, as with his earlier films, it is the tone that makes the music. For it is clear from the way the malice is dispensed here that the film, dedicated in loving memory to a recently deceased dictator, is a jet-black satire that, especially towards the end, delivers a surprisingly political message that is unlikely to be particularly palatable to the USA.

Besides that, of course, Sacha Baron Cohen never misses an opportunity to serve up gags of the particularly tasteless variety. For instance, there's a scene starring a pregnant woman and a cell phone that has to be seen to be believed that there really is SOMEONE who went that far in a comedy. This form of brute humor doesn't always work. While scenes like Aladeen's first experience with masturbation make for some embarrassed laughter due to the great background music alone, there are also moments where the laughter gets stuck in your throat. Either the gags here just aren't funny, or they overshoot the mark. Two scenes in particular stuck in my mind, which try to shock with jokes about absolutely taboo topics. And these attempts go completely in the pants, not only because the gags are simply extremely weak.

However, for every tepid joke comes another big laugh, like a delightfully self-deprecating appearance by Megan Fox, the surprising guest appearance of an actor towards the end of the film, a helicopter flight in which the discussion about Aladeen's favorite cars has unexpected consequences, or the character, just bubbling over with prejudice, that John C. Reilly gets to play. As often as the film pushes the boundaries of good taste, it still somehow always hits the exact spot that makes the audience laugh out loud, accompanied by shame. Whoever understands that the whole thing is to be understood as satire and whoever can accept that The Dictator comes across as much more well-behaved than its predecessors from Kazakhstan and Austria, is guaranteed to be entertained. Why, however, the FSK has given the completely inappropriate release from 12 years (which means de facto that children from 6 years can watch the film), remains not really understandable in view of some really vicious moments. For Sacha Baron Cohen fans over 16 but is undoubtedly: well worth seeing!

Cinema trailer for the movie "The Dictator (USA 2012)"
Loading the player ...