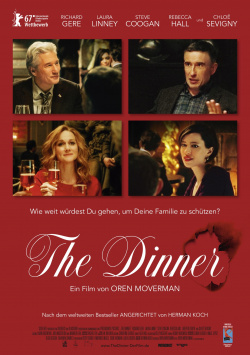 It looks like a normal dinner invitation when successful congressman Stan Lohman (Richard Gere) and his wife Katelyn (Rebecca Hall) arrange to meet Stan's brother Paul (Steve Coogan) and his wife Claire (Laura Linney) at a posh restaurant. But it's clear to Paul that his brother has something else in mind. After all, the two have little to do with each other. And there's that awkward secret hanging over the families like a dark shadow. Since Stan has ambitions for the governorship, this dinner will surely have something to do with it. And indeed, it doesn't take long for Stan to bring up the terrible secret. Now it's a matter of: go public or keep quiet? The evening quickly turns into a nerve-wracking psychological duel that reveals even more chasms about the family.

With The Dinner, director Oren Moverman has staged a gripping chamber piece that asks some very essential questions: What is one willing to do for one's own children? How far can you throw your own morals overboard to protect your children? Is it always right to protect your children or are there moments when you need to help them take responsibility for their actions? And finally, what is truth and how does one deal with it? Moverman doesn't deal with all of this in a straightforward manner, instead providing the viewer with new puzzle pieces for the terrifying picture with each course his protagonists are served - only to leave further room for interpretation and speculation at the end.

To reveal much more about the cinematic adaptation of Dutch author Herman Koch's award-winning novel Angerichtet would spoil much of the film's suspense and emotional power. Only this much can be said: for the fact that the whole thing consists for large parts of dialogues exchanged at a table in a restaurant, The Dinner is damn exciting and extremely gripping for over two hours. Seasoned with a bit of sarcastic humor and served up by a really great ensemble of actors, this psycho dinner is really tasty cinema fare.

The film is a psychodrama that raises some very big societal issues in small ways. This is not just about personal morality, but also about what adults teach their children. Media and politics are also included here with a very critical eye. At first glance, The Dinner may seem to be just a small film. The truth it reveals, however, is as big as it is uncomfortable - but it's incredibly important that people grapple with such uncomfortable questions as those posed here. You can see just how uncomfortable it can be in the faces of the protagonists. A really good drama that more than deserves an Absolutely Worth Seeing!