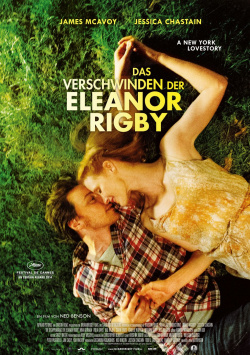 The Disappearance of Eleanor Rigby

Eleanor (Jessica Chastain) and Connor (James McAvoy) were once what is commonly called a dream couple. They seemed made for each other and their love seemed strong enough to withstand all the little and big adversities of life together. It was a happy love that broke as quickly as it was born. For when a tragic event shatters the couple's inherently harmonious life, they both react to it in completely different ways. While Eleanor withdraws more and more into herself, Connor tries desperately to return to normality in his everyday life and also in the relationship. But when Eleanor decides to disappear, the end seems inevitable for this love story.

The Disappearance of Eleanor Rigby, while having a similar premise to David Fincher's Gone Girl, is not a gripping relationship thriller, but a quiet marital drama that started out as a very interesting film experiment. This is because director Ned Benson originally told the story in two films from different perspectives. While the first part showed the events from Eleanor's point of view, the perspective switched to Connor in Part 2. The version now coming to our cinemas is a composite of the two parts. The result is a very well acted drama that has some extremely intense moments to offer, but on the other hand feels a little shallow.

This may be because Eleanor in particular comes from a social class where, in times of personal crisis, one can well afford to start studying again or simply take a long break abroad. To be sure, this doesn't make the loss Eleanor has suffered any less terrible for her. But she's being picked up in a way that probably only very few who are going through a similarly difficult time are granted. And Connor, too, is only seemingly facing more of a relatable reality, having to fight not only for his marriage and against his grief, but also to keep his restaurant open. But again, there's a wealthy dad whose successful restaurant the filius can take over if his own business doesn't work out - he just has to get over his ego and get a little closer to his estranged father.

The fact that the two protagonists' privileges allow them to focus fully on their personal grief recovery creates a certain distance from many viewers, which significantly diminishes the emotional intensity of the story. Still, even though it may lack a certain sense of reality for many viewers, the whole thing works very well as a moving drama. This is primarily due to the fact that James McAvoy and Jessica Chastain succeed very well in making their characters' emotions seem very authentic. This is not only true for their grief, but also for their great love for each other, which can be seen and definitely felt in flashbacks. And also the supporting actors make sure that the film's acting is beyond any doubt.

There is no question that The Disappearance of Eleanor Rigby is a good film. But it is also a somewhat exhausting, depressing work, whose staging keeps the viewer too much at a distance to be able to achieve the emotional impact for which the potential would have been there. And that's why, despite some very good moments, the film is only worth seeing with some reservations for lovers of quiet American arthouse dramas!

Cinema trailer for the movie "The Disappearance of Eleanor Rigby (USA 2014)"
Loading the player ...