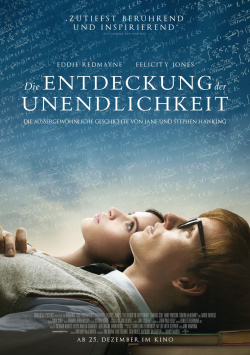 The Discovery of Infinity

Young student Stephen Hawking (Eddie Redmayne) lives for his research into the dimensions of time and space in the universe. He rarely allows distractions. Only the student Jane Wilde (Felicity Jones) manages to bring Stephen to other thoughts for once. Between the two blossoms a young love, which soon threatens a dramatic end. When Stephen is diagnosed with the incurable nerve disease ALS, he withdraws completely. With doctors giving him only a few years to live, he wants to protect Jane from future pain and end the relationship. However, Jane is not ready to give up on the love of her life. She stands by Stephen and is ready to face whatever challenges his illness brings. But the more the disease takes away Stephen's ability to move and communicate, the clearer it becomes to Jane what a burden and responsibility she has taken on. And as Stephen defies every physical limitation to push forward with his research, the more Jane seems to lose sight of her own happiness.

The Discovery of Infinity is less a classic biopic about Stephen Hawking and more a moving romantic drama that, especially in its final third, increasingly shifts its focus to Hawking's wife Jane. That's actually not surprising, since the film by Academy Award winner James Marsh (Man on Wire) is based on her memoir Love Has Eleven Dimensions: My Life with Stephen Hawking. The screenplay adaptation by Anthony McCarten, author of the wonderful At the End of a Day Far Too Short and its novel, turns the couple's life and love story into a romance sprinkled with many goosebump moments, with Marsh's staging pushing hard on the tear gland more than once.

There the icing seems a bit too thick at times, revealing some dramaturgical lengths as well. But in the end these weak points hardly have a negative effect on the overall impression. Because the acting of the actors is so great that the viewer is willing to put up with a few tougher or too sentimental moments. Not only the supporting actors, but also Felicity Jones are overshadowed by Eddie Redmayne. But director Marsh gives them enough room to fully develop their talent as well. Nevertheless, the film belongs in the end to a great Eddie Redmayne, who plays especially as a young Stephen Hawking the creeping loss of control over his body grandiose and extremely moving.

But also as an older Hawking, as most people might know him, the young Brit convinces all along the line. He finds the right nuances to make his play not too striking or even unintentionally funny. Redmayne not only manages to convey the physical aspects of the character in a believable way. The charisma that the brilliant thinker exudes is also palpably conveyed to the screen through this award-winning performance.

The Discovery of Infinity is not a particularly subtle work. Marsh's production makes no secret of its desire to evoke great emotion first and foremost. For this to succeed, there should definitely be a certain soft spot for slightly cheesy emotional cinema. Also, viewers expecting an in-depth examination of Hawkins' scientific work might end up rather disappointed, despite the many successful aspects. However, those who are prepared for an intense love story with great actors will not only be emotionally moved here, but also very well entertained. A very nice film, which despite small point deductions in the B grade at the end still deserves a clear Absolutely worth seeing!

Cinema trailer for the movie "The Discovery of Infinity (Großbritannien 2014)"
Loading the player ...