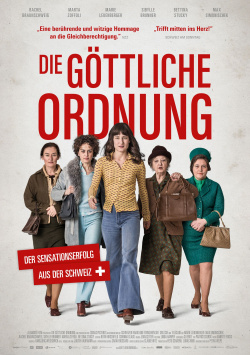 In a small village in Appenzell, Switzerland, at the beginning of the 1970s, Nora (Marie Leuenberger) has resigned herself to taking care of the household, her husband, her two sons and her disgruntled father-in-law. While the revolutionary spirit of the 68ers is everywhere to be felt, here old traditions are held on to ironically. But then Nora begins to take an interest in women's suffrage, which has not yet been introduced in Switzerland. And she begins to understand what rights and opportunities she has been deprived of up to now. Slowly, she begins to get politically involved and is able to infect other women in the village with her newfound passion, as together they rebel against narrow-mindedness, outdated sexual morals and for equal rights. But then this struggle threatens to break not only the village community, but also Nora's family. Is she willing to pay this high price for her beliefs?

The Divine Order pulls off a bit of a feat: the film deals with a subject that has an uncanny number of aspects that you, as a viewer - and especially as a female viewer - can't help but be upset about. And indeed, some scenes of the film make you extremely angry, especially when you are confronted with a narrow-mindedness that you can't counter with objectivity and that only knows violence as an answer. It's a problem that can unfortunately be observed in many other important discussions, and it's just as relevant today as it was in the early 1970s. And yet, the film not only manages to entertain enormously well, but also makes its audience laugh without ever diluting the importance of the subject.

director Petra Volpe demonstrates a keen sense of clever dialogue and exposing wit that works as a pleasant counterbalance to the actual gravity of the subject matter. Thus she reveals the absurdity of the fact that in a country like Switzerland women were denied the right to vote until 1971, and that there were a frightening number of people who did not see the need to change this state of affairs. Thus, the reaction of the men in Nora's village to the women's fighting spirit also reveals something that one still encounters in very many people today and which apparently makes any form of rational thinking and thus also objective discussions impossible: the fear of change.

Thus, while Volpe's film tells of events that can certainly be called history, it is at its core highly topical and therefore hugely important. That being said, The Divine Order is very well acted and entertainingly directed, so you can forgive the film for a cliché or two. All this leads in the end to a very clear vote: Absolutely worth seeing!

Cinema trailer for the movie "The Divine Order (Schweiz 2017)"
Loading the player ...