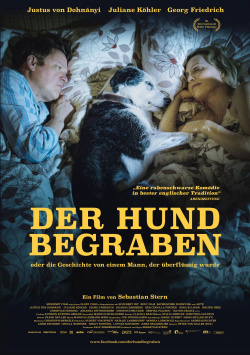 Hans (Justus von Dohn&aacute;nyi) has a problem: he has become superfluous to those around him. At his work he has simply been rationed away, his daughter Laura (Ricarda Viola Zimmerer) is simply embarrassed by him and his wife Yvonne (Juliane Köhler) only has eyes for a stray dog. In this frustrated situation, Hans is the perfect victim for a seductive car saleswoman who tries to sell him a fast car. When he runs over his wife's new best friend with the new car on the way home, the mess really begins. Yvonne doesn't know about the dismissal, the severance pay or the new car. To keep things that way, Hans gets involved when a strange stranger (Georg Friedrich) offers him his help. He should have left that alone.

With Der Hund begraben, Sebastian Stern (The Bumblebee) has directed a wonderfully biting comedy about the fear of meaninglessness and the inability to talk about personal failure and one's own fears. Justus von Dohn&aacute;nyi plays the unassuming family man who suddenly reveals his own depths after the unfortunate demise of the new family dog absolutely perfectly. And the rest of the ensemble is also very well chosen, with Georg Friedrich in particular standing out in his almost signature role as a shady oddball.

The film convinces with an atmospherically dense production, even if the visual realization always has a slight TV character. The dog buried is evenly a small film, which has now at least from the visual language not necessarily cinema quality. But that doesn't mean that a visit to the cinema wouldn't be worthwhile. The good story, the occasionally wicked humor and the good actors are well worth the admission money.

Although there are minor lengths, not least due to the fact that Stern has found the perfect ending for his story, you are left with a very positive overall impression in the end. If you like small German arthouse comedies of the slightly nastier kind, you should not miss this very successful work. Worth seeing

Cinema trailer for the movie "Burying the Dog (Deutschland 2016)"
Loading the player ...