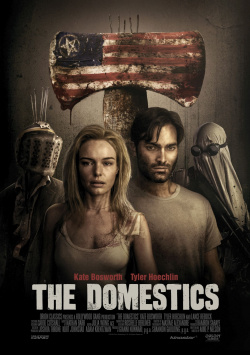 After the state wiped out most of the population to start all over again, most of the survivors have banded together in groups. The various gangs are all about taking out the others, hunting them down and killing them. Nina (Kate Bosworth) and Mark (Tyler Hoechlin) have managed to survive in this new world so far. But now Nina wants to leave the safety of her home to go to her parents, who she hopes haven't fallen victim to extinction. It's a perilous journey, one in which the couple must constantly fight not only for survival, but also for their marriage. For that, unlike Nina and Mark, seems long dead.

The Domestics is a somewhat mixed cinematic experience. The post-apocalyptic thriller has some very intense moments and well-staged, thoroughly violent action. Especially the imagery can fully convince with a good set and some small Mad Max borrowings. On the other side are the script and the actors. The story itself is very thin and holds with its rudimentary character the episodic parts together laboriously. The whole thing follows a clear pattern: Nina and Mark drive from A to B, get into a dicey situation, fight their way out of it to continue driving from B to C - and so on, and so on.

Not only does this seem tedious, but it also feels like you've seen it all before somewhere else. Although there is not only a hell of a lot of talking (and silence), but also some fast-paced chases and explosive fight sequences, at some point only boredom dominates the action. This may also be due to the fact that the audience is heartily indifferent to the characters. Nina comes across as extremely unlikeable with the rejection she gives Mark, as it's not clear for a long time why she treats him this way despite his best efforts to get her to her parents. Her annoyed looks and her silence get on your nerves quite quickly, which is also why it's hard to sympathize with her fate.

The Domestics has a few good moments that may be enough for some genre fans to justify buying a movie ticket. But overall, they're just not enough to make up for the weaknesses in the script and the still rather wooden acting of the two leads. If you like post-apocalyptic thrillers with some blood and action and can overlook a weak dramaturgy and one-dimensional characters, the film can be recommended despite all justified criticism. Otherwise: Only conditionally worth seeing!

Cinema trailer for the movie "The Domestics (USA 2018)"
Loading the player ...