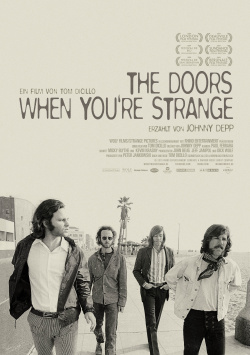 The Doors: When you`re strange

The Doors are undoubtedly one of the most influential rock bands in modern music history. Almost forty years after the death of singer Jim Morrison, the Doors still exude the fascination that once made them the mouthpiece of their generation. Actually, it`s a wonder that there hasn`t been a real documentary about this band until now.

But now independent director Tom DiCillo has dedicated his first feature-length documentary "The Doors: When you`re strange" to the cult band, and has enlisted prominent support from another Doors fan: Johnny Depp. Tom DiCillo takes an unusual approach to tracing the band`s career from its beginnings on Venice Beach in 1965 to the death of rock poet Morrison. He completely eschews actual interviews with the remaining band members, pundits, or loved ones, instead using only archival footage, with much of the footage shown here previously unreleased.

Thus, on the one hand, DiCillo creates a very intimate portrait of the band that may not offer much new in terms of content to fans of the Doors, but still offers many fresh insights worth watching. Not dated in any way, the images offer a look at the band's life on and off stage, showing live footage and studio work and rare interviews. Of course, the Doors' music takes center stage, but the political and social environment in which the band's six studio albums were made is also poignantly portrayed. The result is a captivating overall picture that works magnificently not only as a music documentary but also as a historical document.

"The Doors: When you`re strange" is an absolute must for any fan of the band. But also, who has basic interest in music and recent cultural history, should not miss this worth seeing contemporary document. Worth seeing