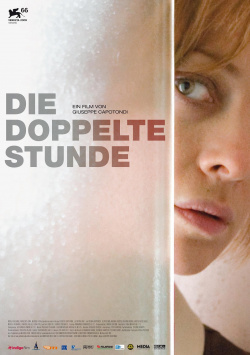 In search of the great love, security guard Guido (Filippo Timi) meets waitress Sonia (Ksneia Rappoport) at speed dating. Quickly a very special relationship develops between the two, which is filled with love and trust. But their happiness does not last long. When the villa Guido is looking after is raided, Guido is murdered. Sonia is left traumatised. But then she sees Guido again and again, hears him on the phone. Is it just hallucinations, or is someone playing a cruel game with the young woman?

The Double Hour is a compelling blend of psychological thriller and mystery, garnished with elements of film noir and light horror. Even though influences from Hitchcock to M. Night Shyamalan are clearly evident, director Guiseppe Capotondi has mixed his genre cocktail so skillfully that something entirely his own has emerged. After the rather nice beginning, which almost seems like a romantic comedy, the film drastically changes its tone with the raid on the mansion. This is followed again and again by sometimes very surprising twists that only end with the very last shot.

Whenever the viewer thinks he has deciphered what is happening, Capotondi completely reshuffles the cards. Sonia in particular proves to be an incredibly layered character whose various facets are magnificently revealed by Ksenia Rappoport (The Unknown). Sure, some of the twists and turns seem far-fetched and don't necessarily stand up to logical scrutiny. But The Double Hour is one of those films whose atmosphere should simply captivate you and where pleasant goosebumps and suspense should not be destroyed by too strict adherence to logic.

Lovers of clever little thrillers will definitely get their money's worth here. Good actors, a cleverly constructed story, engaging imagery and moody music, all make The Double Hour a real must-see. Worth seeing