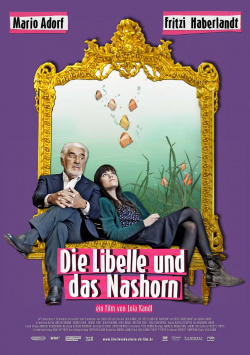 The Dragonfly and the Rhino

This is a day that up-and-coming author Ada Hänselmann (Fritzi Habermann) would like to get over with as quickly as possible. Full of pride, she wanted to present her first novel at a reading. But the guests present were only interested in actor Nino Winter (Mario Adorf), who presented his biography at the same event. And then her boyfriend breaks up with Ada on the phone. At the hotel she just wants to forget this double disgrace. But then there she meets the aging screen star, whose flight has been postponed, again. After a hesitant start, a lively conversation begins between the two, which leads to an unusual game and finally to a very special night, which still has plenty of surprises in store for the two disparate people.

The Dragonfly and the Rhino came out of a very sad situation. For director and screenwriter Lola Randl was actually in the process of shooting her film The Invention of Love when work had to be stopped after the surprising and far too early death of the 26-year-old leading actress Maria Kwiatkowsky. To deal with this, Randl turned to a completely different project. The result is the sometimes whimsical, sometimes somewhat fairytale-like, then again humorous and very emotional story of an unusual night in which an even more unusual friendship develops.

No question, the sovereign acting of Mario Adorf and the playful acting of Fritzi Haberlandt can convince and give the film a certain charm, to which the very own atmosphere of the production is definitely still conducive. Nevertheless, the overall picture has some clear flaws, which have a negative impact on the entertainment value of the film. Especially the dialogues seem a bit stilted at times and try too hard to be funny or to be a bit weird. This has a particularly negative effect on the character of Ada. At the beginning Haberlandt manages to make Ada seem very likeable and lovable in her somewhat silly way, but during her conversations with Nino she sometimes seems insensitive and pushy, which doesn't exactly increase her likeability. At some point, you seem to understand why her boyfriend left her.

No question, the film has some very nice moments, is full of nice ideas and skilfully walks the line between humour and melancholy. This is then certainly enough to satisfy viewers who like smaller German films beyond the mainstream. For the rest of us, the clear television play character, the sometimes somewhat laboured dialogues and the unfortunately all too seldom working humour won't elicit much enthusiasm. For it there is then unfortunately also only one at the end: very conditionally worth seeing!